I love history and there is something very compelling about lost ancient cities… even if they are found deep underwater. The ancient Roman city of Baiae is one such place. It is sunken off the northwestern shore of Naples, Italy. Baiae owed its life, wealth and its demise to a volcano. The same volcanic activity that brought luxurious mineral springs to the surface and thereby created an incredible resort area for the Romans, would also eventually cause the city to sink into the Tyrrhenian Sea.

Baiae was originally built as a port city on the Cumaean Peninsula. It was a vacation spot of notable historical figures such as Julius Caesar and Nero. It was a decadent resort that specialized in parties, indulgent lifestyles and debauchery. Just the kind of thing that appealed to Roman emperors and other high-profile visitors. The hot springs weren’t the only attraction. Baiae was home to casinos and they built luxurious swimming pools for their visitors to lounge in. 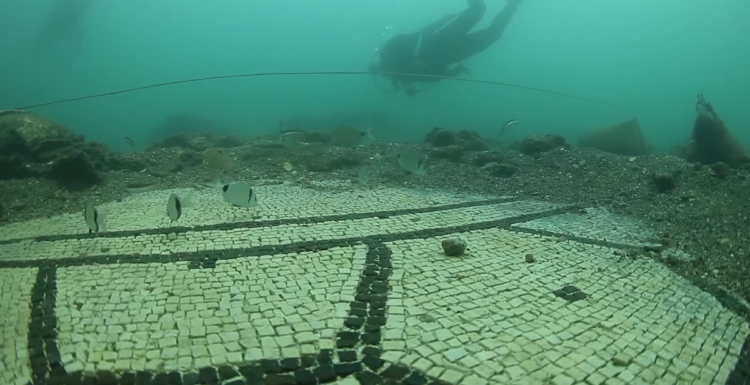 They say that Roman Emperor Caligula used Baiae for the site of his floating bridge in 39 A.D. Who knows? But it would not surprise me. The city was sacked during the barbarian invasions of southern Europe during the 8th century. Then the city was abandoned during a malaria outbreak in the 16th century. Later, and I don’t know exactly when, water levels rose due to volcanic vents and swallowed the city. A pilot named Raimondo Baucher, was the first to photograph the underwater city in the 1940s.

The city is still surprisingly intact and preserved. Archaeologists in the 1980s began to survey and protect the site. The Archaeological Park of Baiae was ratified as a protective agency on August 7, 2002. In 2007, divers were permitted to visit the city. But they are closely monitored and supervised. Today, you can take a glass bottom boat and see the city. You will see roads, sculptures and many intact buildings. It would be fascinating to visit.

Baiae has now become a tourist and a historical attraction where you can explore the underwater remains. While you are there, you can also visit Roman ruins that are still on land. Including the Temples of Mercury, Venus and Diana.

Baiae is by no means the only sunken city or the only one that seems to have vanished. The Greek cities of Helike and Pavlopetri are both sunken cities in the Mediterranean. Helike was submerged after a tsunami following a massive earthquake in 373 BC. Pavlopetri sank 3,000 years ago from either erosion or another tsunami. These cities are thought to be the inspiration for Plato’s fabled Greek island of Atlantis. But that argument is still ongoing in the world of archaeology.

Baiae was an ancient Roman town on the northwest shore of the Gulf of Naples. It was deserted and its ruins largely submerged by local volcanic activity by the time of the Renaissance. #SunkenCities[9] #AncientRome[10] #Baiae[11] pic.twitter.com/OQRIVjuLxa[12]