This is simply one of the most inspirational stories I have ever read. You need to read all of it[1]. Judy, an English Pointer, wound up saving the lives of many men who were prisoners of war in WWII and subjected to the barbaric cruelty of the Japanese and the Koreans in conditions that were literally unsurvivable. She protected them and adored one soldier named Frank above all others. They were inseparable. She survived near drowning, starvation, being shot at and the fact that she was a delicacy to the Japanese and Koreans. She rescued men from drowning after a shipwreck, kept them from starving, distracted guards so they would not be caught violating the rules and watched over Frank when he was very ill. There was never a better friend and now Judy’s story is being told. 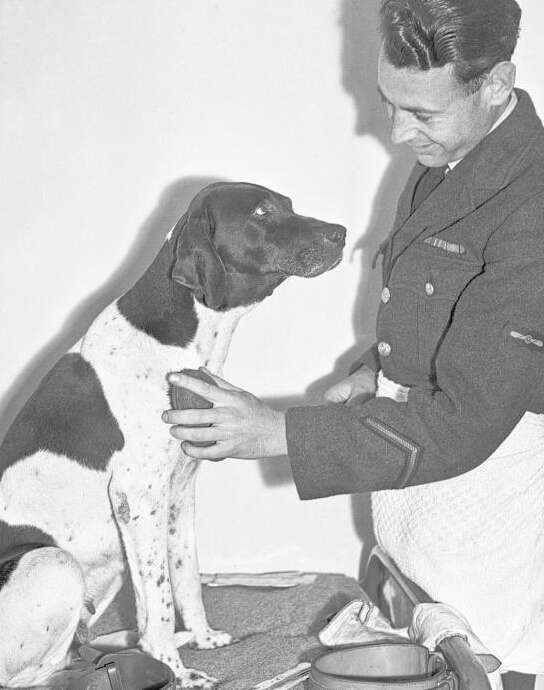 Frank visited Judy in quarantine after they came back to Britain.

From The News Hub:

Judy knew exactly how to protect starving inmates in Far Eastern camps – and how to avoid being shot dead herself. Her remarkable story – involving shipwreck, near-drowning and heroism – has been pieced together.

THE Japanese guards suspected. The game was up – the prisoners knew it. The guards began searching the barracks, and any minute now would lift the blanket to discover the sack of rice, filched from the Japanese officers. The half-starved British prisoners trembled with fear. Discovery would mean a savage beating for every Prisoner of War in the camp – or worse.

They had hoped the rice might keep them alive for a little longer; now it seemed it would be the death of them.

The prisoners scarcely dared breathe. And then something extraordinary happened. A streak of brown and white tore into the room, charging around the guards, carrying a human skull in its mouth.

The Japanese had a superstitious horror of death symbols such as bones and skulls, and were alarmed by the creature hurtling around, eyes glowing. Just as one guard raised his rifle to shoot at the dog, it hared out of the barracks and disappeared into the Sumatran jungle surrounding the camp.

Inspection forgotten, the inmates were left alone. Not for the first time, Judy the pointer – who was to become the only official canine Prisoner of War (PoW) of the Second World War – had saved the lives of the men who had adopted her.

Recalling this incident years after the war, former prisoner Les Searle said: “I think animals have a built-in radar system which picks up all radiations of different sensations such as fear, happiness, panic and sorrow. Judy certainly sensed the danger in that room and she knew what to do about it.”

It was 1942, and conditions in Sumatra’s prisoner camps were beyond endurance for many of the thousands of inmates: rations were disgusting and in short supply, reducing to skin and bones the sleep-starved men who were forced into gruelling manual labour. Malaria, dysentery, skin ulcers, worm infestations and beriberi were widespread; medical care was non-existent. PoWs were reluctant to admit being ill, because it meant even smaller food portions.

The Japanese and Korean guards, dehumanised, left the inmates living in fear: vicious beatings were routine. One had his eardrum pierced when a pencil was forced into his ear. Prisoners were punched and hit with shovels for the “crime” of dropping their tools. Lives hung constantly by a thread.

These were “secret” wartime prisoners, held in camps of which the Allies had no knowledge until three months after the fighting in Europe had ended, because of the island’s isolation. At least six Allied spy operations to Sumatra failed.

Such heroic dogs are legendary. Not only did Frank survive the horrors of the prison camps, so did Judy, who was honored when she returned home. In her short life, she helped save so many and loved Frank as only the most loyal of friends could. When others gave up, Judy didn’t and she beat the odds over and over again. Frank lived to be 84 and built a marble monument for her grave, with a plaque that included the words: “A remarkable canine… A gallant old girl who, with a wagging tail, gave more in companionship than she ever received… and was in her short lifetime an inspiration of courage, hope and a will to live, to many who would have given up in their time of trial, had it not been for her example and fortitude.” No Better Friend by Robert Weintraub was published by John Murray on Thursday, June 4th. Simply one of the most heart wrenching and uplifting stories I have ever read. 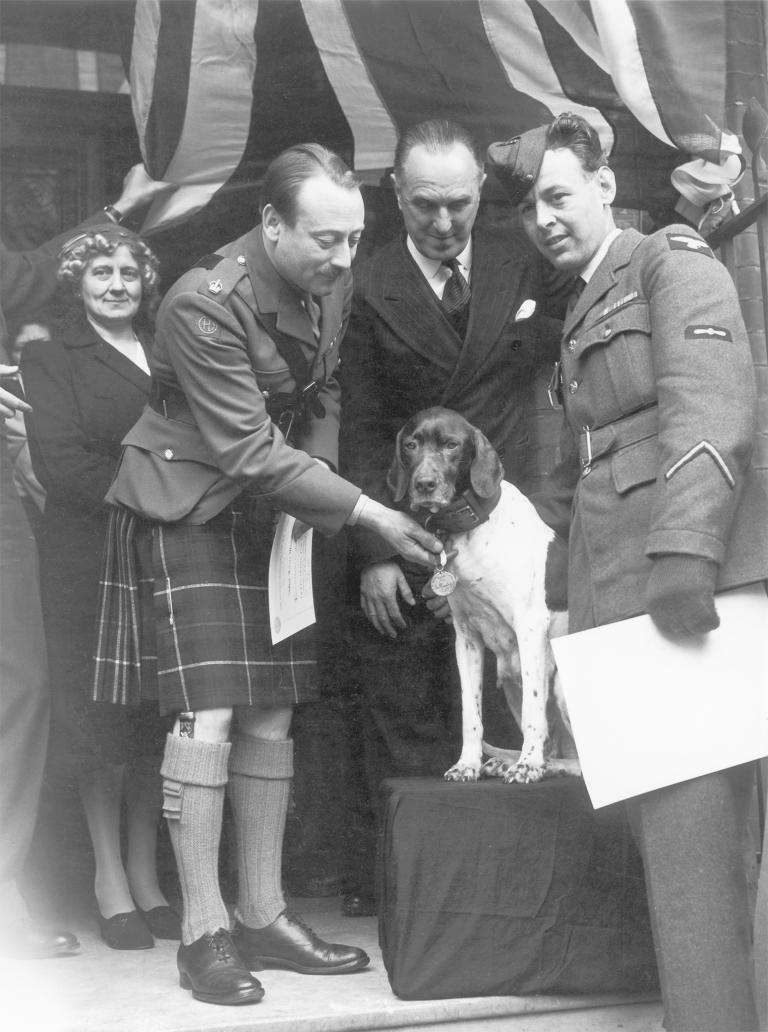 Judy was greatly fussed over and awarded the PDSA’s Dickin medal – the equivalent
of the Victoria Cross – after the war.
Endnotes: