This is just simply awesome.[1] A bunch of Houston bakery employees were trapped at work for two days because of flood waters from Hurricane Harvey. Instead of just sitting around, they decided to bake bread for victims of the storm. They baked hundreds of loaves of pan dulce bread. The name of the bakery is the El Bolillo Bakery there in Houston. They posted the news on Facebook, so people would know where they could get some food.

Even though they stated they were closed because of the flooding, they let Houston know they had been baking the bread for people, so when they could open their doors, there was plenty for everyone. One post showed tray after tray of bread they had baked. I bet every bit of it gets eaten as well. What a wonderful thing to do for people in need during and after the storm. 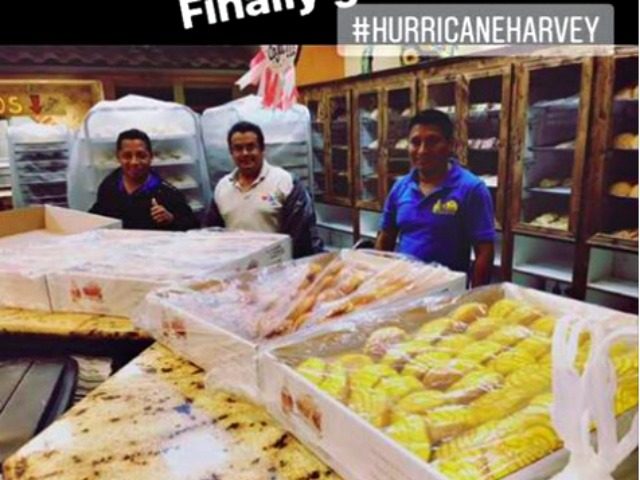 A group of Houston bakery employees stuck at work for two days due to flood waters in their area spent their time wisely by baking hundreds of loaves of pan dulce bread to ease the hunger of fellow victims, a report says.

The owner and employees of El Bolillo Bakery in Houston shared a Facebook post to alert customers that the shop is closed due to the storm of the century. But, the post also notes that they haven’t been idle, ABC’s KSAT reported.

The owner of El Bolillo told friends that the bakery is “closed until further notice, but our bakers cooked all night long and we will be prepared to help as soon as we can with bread.”

Hurricane Harvey pan dulce we are going to take to those in need. Bakers we're stuck inside for two days! We will announce when we open our stores again.

The bakers were apparently “stuck inside for two days, ” but instead of doing nothing, they decided to do their part to aid their fellow Houstonians.

In another entry, the bakery workers posted a photo of the tray upon tray of bread baked for hurricane relief efforts.

Hearts go out to those in danger and those who have lost everything.. we are closed until further notice, but our bakers…

The bakers’ posts have been shared thousands of times and word of their generosity is spreading all over the place. When you are really hungry, bread fills the belly and children love it. Others are donating and providing water and shelter. 30,000 people are being displaced by Harvey and over half a million people have serious damage to their homes. This is just the beginning and Texans are going to need all the help they can get.

I noticed a cross on the wall… they appear to be Christians as well. They certainly have a giving and charitable spirit among them. These are wonderful people and they do Houston proud. I hope they keep baking. Bread is the staple of life and it will help those who are victims of this catastrophe get through the rough days and weeks ahead. Bless these guys for doing this.