These parents are saints. Could you be as strong as they are? Wow.

Now we bring you the story of Matthew McConnell, who suffered a terrible accident when he was 10 months old and was given 24 hours to live. 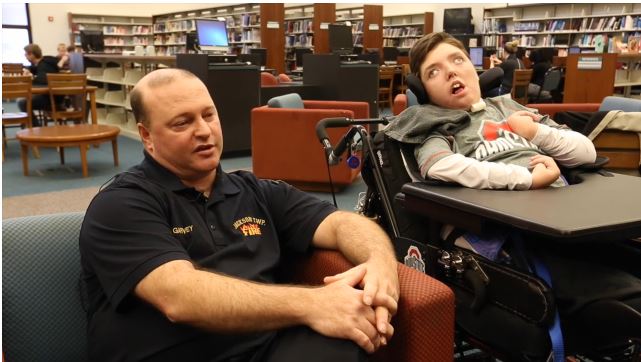 It’s not easy, though. After a babysitter neglected to secure the strap that went between his legs on a high chair, Matthew’s chin caught on the tray and he dangled long enough for his brain to lose its oxygen supply.

The damage was terrible. Matthew is unable to speak, walk or feed himself. But still he lives, thanks to the dedication of his parents.

“If someone would have told me a week before the accident what I’d be doing the next 20 years of my life, I’d have said, ‘No, I couldn’t handle that,’ ” said Matthew’s mother, Kim Crishbaum.

“All I know is when it happened and he was teetering on the edge of surviving for several weeks, there was no question in my mind that I wanted him to survive.”

For his father, Mike McConnell, this was the hand his family was dealt.

He used to be upset that he wasn’t there to catch his son, like he had when the boy was learning to walk. He said he’s since realized that neither he nor Crishbaum was to blame.

The couple had different plans back then. McConnell said Matthew was injured on the same day he had planned to quit his job at a printing company and stay home with his sons, Matthew and Patrick. Crishbaum had been offered a research writer’s job at Battelle that would pay enough for the family to get by.

Now, McConnell said, he works 50 or more hours a week at a different printing company to pay the bills.