Can You Get Rich Panhandling? Wait Until You See What This Bum Makes Per Hour In NYC!

While fast-food workers are complaining about not making $15/hr at their minimum wage/minimum skill job, Will Anderson is raking in the dough left and right. His occupation of choice? Professional bum![1] 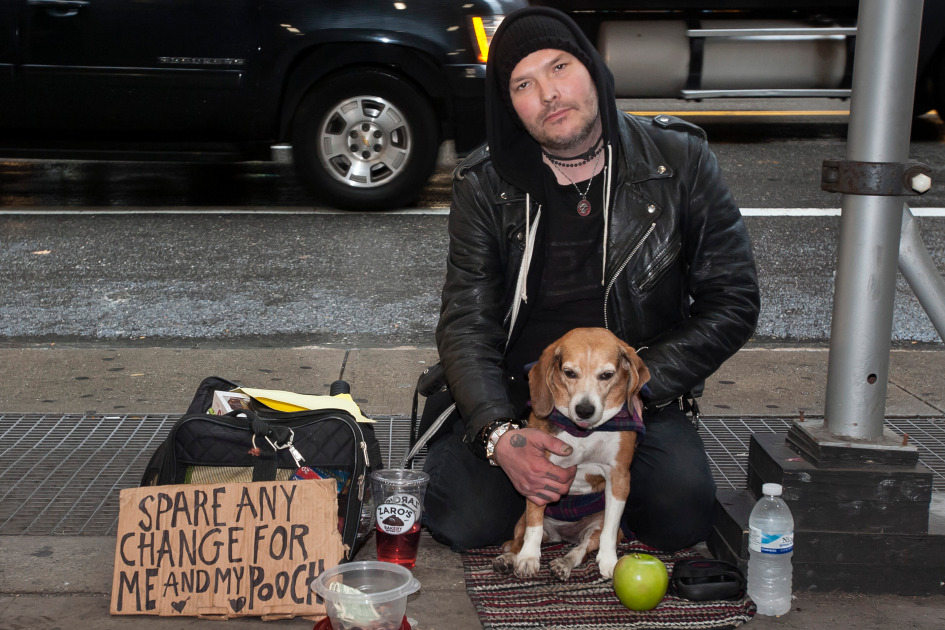 A panhandler outside Grand Central Terminal says he rakes in up to $200 an hour from kind-hearted New Yorkers.

And the 43-year-old former theater stagehand is only one of a legion of beggars in the city hauling in big bucks and a smorgasbord of food doing nothing but sitting on the sidewalk with hands out.

“On a Friday morning, I make $400 in two hours,’’ said Will Andersen, who was with his 9-year-old dog, Rizzo, on East 42nd Street between Vanderbilt and Madison avenues on Tuesday.

As Andersen was talking to The Post, another beggar told him gleefully, “I got three breakfast sandwiches today! And they were all meat! I’m putting on pounds out here!”

The beggars’ comments came a day after Police Commissioner Bill Bratton urged New Yorkers to simply not give[4] if they want to get vagrants off the streets.

Panhandling is so lucrative, Andersen said he now rents a room in Inwood after being homeless for three years. He said he’s on the street only to collect handouts.

Andersen admitted that the pooch helps.

“People are more generous because I have a dog, 100 percent. They throw me a dollar and say, ‘That’s for the dog,’ ’’ Andersen said, sitting next to a duffel bag full of donated food for himself.

Another beggar, working the northeast corner of West 35th Street and Seventh Avenue near Penn Station, said that just like everything else in the city, it’s all about location for vagrants.

“There are other spots where people get hundred-dollar bills. I could go over to Fifth Avenue and make $150 before lunch,’’ said the man, 36, who gave only his first name, Daniel. “But I don’t want to deal with the hassle,’’ he said. “There’s people that bully you to get out of the good spots.’’

Some vagrants even admitted that Bratton is right on the money — New Yorkers shouldn’t be giving them dough.

“If you stop giving them money and help them with those other things, like blankets, clothing and food, they would definitely leave because they would know they couldn’t get the money to get high or drunk,’’ said Shaunyece Darling, 22, who panhandles with her boyfriend, dog and three cats.

While we feel badly for people who have been reduced to begging for spare change, we also have to realize that when we give them that money, we’re essentially giving them a fish, instead of teaching them how to fish.