A terminally ill boy won’t ever have the chance to grow up to be a sheriff – but his face was anything BUT sad when the local sheriff’s department made his wishes come true by fulfilling his wish – and he become “sheriff for a day.”[1] 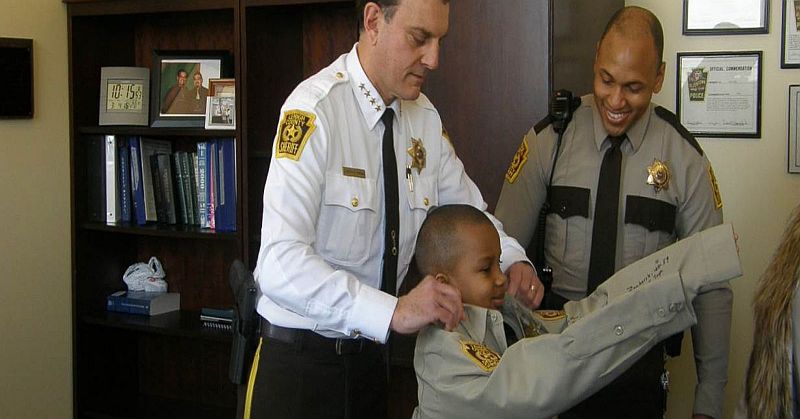 “It was terrific,” Sheriff Joe Hanna of the Lehigh County Sheriff’s Office in Allentown, Pennsylvania, told ABC News. “It was heartbreaking at the same time knowing that his time is limited, but we were lucky to have him.”

Kaleb Holder, 8, was diagnosed with adrenoleukodystrophy, a rare brain disorder, on Jan. 5, according to his mother, Janelle Daly.

“He’s in the advanced stages of the disease,” Daly told ABC News today. “There’s nothing they can do. The only form of treatment is a bone marrow transplant, but that’s only if it’s caught early. [Doctors] said he has about three months before he loses his abilities to walk, talk, see, hear…. He’s going to be in a [vegetative] state because it’s a brain disease. After that he’s going to pass in a year, maybe. He’s already started to decline and it’s very scary.

“There’s just no words to describe how I feel,” she added. “Kaleb is my only son and he’s the youngest. I don’t understand how something like this could happen to such a beautiful child.”

Knowing Kaleb’s time may be cut short, Daly said her eldest daughter’s fiancé, Deputy Richmond Penn of the Allentown Police Department, arranged so Kaleb could have his No. 1 wish come true.

“Ever since Kaleb was in preschool … he loves law enforcement,” Daly said. “That’s all he wants to be when he grows up.”

On March 4, Kaleb was brought into the sheriff’s office, where Hanna swore him in and took him for a ride in a patrol car. Kaleb also met the county’s president judge and received a replica of a sheriff’s vehicle.

“After the swearing him in, I asked him, ‘What do you want to do?’ and he responded and said ‘What are you asking me for?’ I said, ‘Well you’re the sheriff,'” Hanna said, laughing. “We gave him a 20-minute ride, put emergency lights on and I let him sound the siren, which he got a big kick out of. We made it a special day for him and I thought that we would be able to bring to the forefront some knowledge and awareness of this devastating disease.”

Daly said she’s “extremely grateful” for what the sheriff’s office and Allentown police did for her son.

“It was so awesome,” she said. “He’s not going to get that opportunity to grow up and be a sheriff, so at least he got it now. I’m just happy he knows what it feels like.”

I am so glad that this little one was able to have this great experience, and kudos to the Allentown Sheriff’s Department for making this happen for this little one!