If you were homeless, living on the streets and begging for money on a daily basis, would you jump at the chance to take a job? What if that job offered you well over minimum wage?

Now most of us are going to nod our heads vigorously, but apparently there are some people out there who think that the money they make panhandling is worth more than an honest paycheck and the dignity of being able to make your own way in the world and not having to rely on handouts from other people. 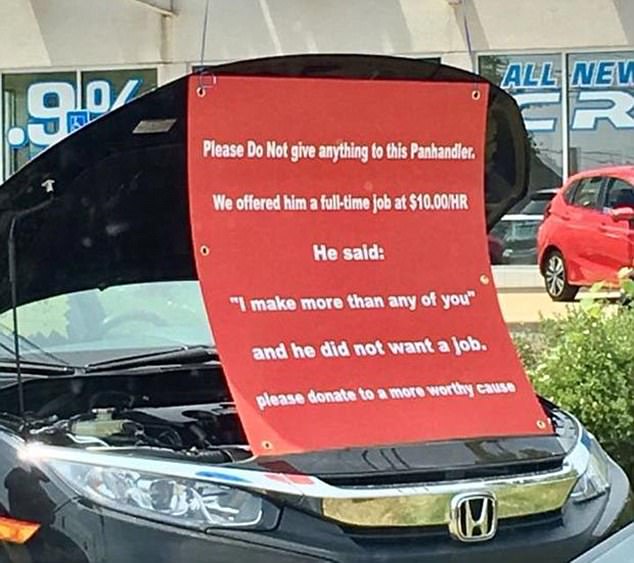 A beggar in Brighton, Michigan turned down a $10.00/hr. job at a car dealership, according to a sign that was put out by the dealership to warn the public against giving him any money. The reason for his refusal? The man claims that he makes more money than any of the people at the location.

“Please Do Not give anything to this Panhandler. We offered him a full-time job at $10.00/HR. He said: ‘I make more money than any of you; and he did not want a job. Please donate to a more worthy cause.”

You can’t help someone who won’t help themselves and it’s a sad day when someone turns down a full-time job (that a lot of people in this economy would absolutely jump at the opportunity to have, by the way) in favor of begging for money from strangers. Where is your dignity? Where is your pride?

The image of the sign was posted on Reddit, where it got 60,000 views. There is nothing stronger than public shaming and hopefully, it will encourage this man to re-think his life plan and pursue a more honorable line of work. I mean, who wants to retire on money they got from begging? Not me.