A teenager becomes horrifically injured, then walked a quarter of a mile to safety while holding his semi-decapitated head after fighting off a gang of murderous thugs. The police got the interview on tape, so bizarre… 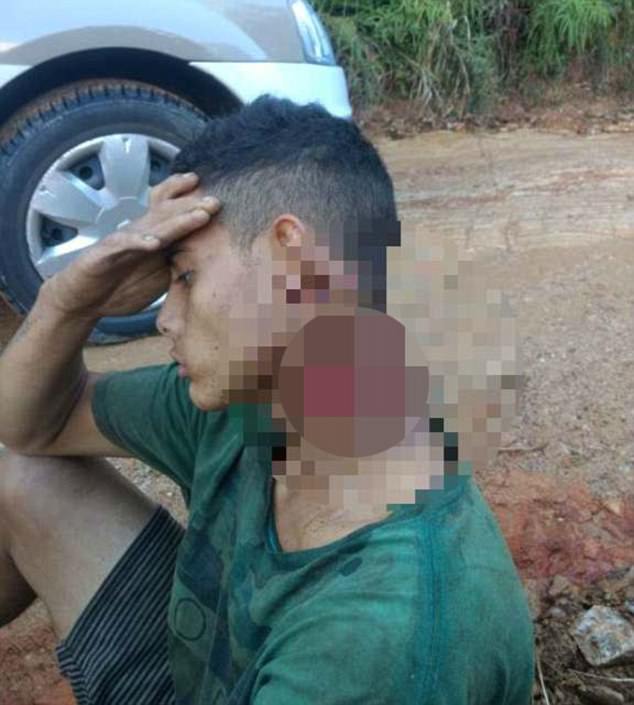 The video footage shot by police in Brazil shows teenager Pablo Patrik de Souza as he holds his head upright as he attempted to keep it in one position. It’s downright creepy to watch and think… could his head just roll right off?

According to de Souza, he was outside around 8 pm when he was ambushed by 3 bandits. He tried to fight them off, but numbers weren’t on his side and they sawed through his neck trying to behead him. He played dead in order to survive. The nasty robbers threw him away in a ravine in a wooded area assuming he was dead. This strong victim hid in the woods all night and then crawled to the road where he was able to alert emergency services.

Despite being nearly beheaded, the teen was able to give a full interview to the police on video. While waiting for the ambulance, the shocked officers asked the victim if he knew why he was assaulted. de Souza told them: “No they came to rob me and I fought back. I punched one in the face and they tried to kill me.”

They took him to the Marieta Konder Bornhausen hospital in Itajai where he underwent life-saving surgery having his head replaced on his shoulders. Police said[2] they are hunting for the perpetrators and expect to make arrests with the help of the victim.

Feel free to watch the video below. Even though the actual wound is blotted out, it’s still incredibly disturbing to watch a person holding their own head on their shoulders. EXTREMELY GRAPHIC… WATCH at your own discretion: