The photos coming from the parts of Texas that have been hit by Hurricane Harvey are absolutely devastating and heartbreaking. There is one picture, however, that has everyone calling Otis the German Shepard a “hero.”

When Otis’ 5 year-old owner, Carter, fled from Stinton, Texas in anticipation of the flooding, the dog was left in the care of Carter’s 65 year-old grandfather Salvador Segovia. Otis escaped on Friday and the photo taken of his big jailbreak has been shared upward of 21,700 times. 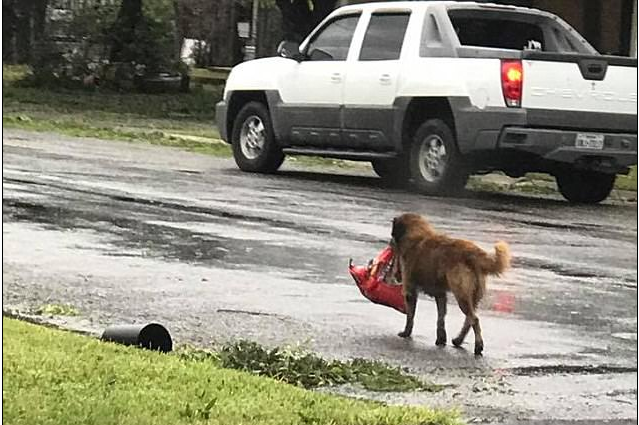 After discovering that Otis was missing, Segovia called for the dog, but he did not come back home.

Saturday morning, a neighbor discovered the German Shepard walking down the street. But there was something about him that made the picture she took go absolutely viral.

He was carrying his own bag of dog food.

She captioned the photo: “This dog is walking around Sinton TX carrying a entire bag of dog food with him. LOL #refugee” and his garnered 8,500 reactions on Facebook by the end of the day.

Luckily, Otis was reunited with Segovia, who was probably relieved that he didn’t have to explain to his grandson that his dog went to live with a distant relative on the other side of the country.

The clever pup is a staple of his community, so much so that “he can go to Dairy Queen and he can get a hamburger,” said Segovia. He helps to calm Carter’s seizures and is reportedly the only dog that is “allowed to lie down in front of the county court house.”

It’s good to know that in the middle of a dark time in Texas’ history, we’re able to have a laugh and to see the bright side of a horrific event.

Now I just need to get myself a dog that can go to Dairy Queen and get food.