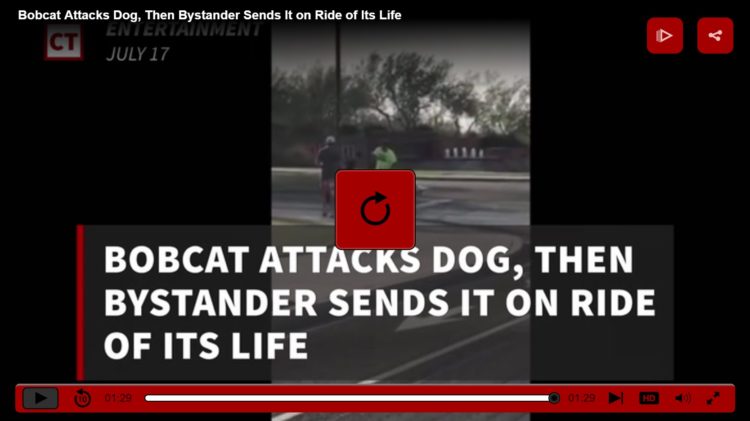 A video uploaded to YouTube on Sunday has been making the rounds with its quick bobcat-on-German-Shepherd-on-man fight.

When a bobcat in Arizona started attacking a dog, a bystander named Jason Garrido jumped out of his car to go help, leaving his car in gear. The video is being filmed by the man who ran after Garrido’s car, having jumped into it to put it in park, as he approaches the group of men, complete with dog and bobcat, as Jason swings the bobcat around and prys it off of his now-bleeding hand.

The bobcat ran away, but with others shouting to call 911, we can assume he was picked up shortly in an ambulance to be treated.

In responding to The Conservative Tribune[2]:

…Garrido said that it was indicative of how people in his community help each other out.

“It all happened too fast, I just told the other men that most people would just drive by, and the reason I love Anthem is the community is there for each other,” Garrido said.

Comments on the video show some divided opinions on whether Garrido should’ve bothered to get involved at all, since it was a dog who was in danger and not a human, and because he exited his car so quickly that he left it to drift off down the street by itself:

“I agree. I applaud his actions, but personally, I’d have done my best Ray Finkel impression and punted him. Bare hands? Nope! Kind of disappointed in the GSD as well. What would his fur missile brothers think of him getting shredded by a kitty?”

“and this is what happens when you drive out the wildlife by building eveywhere you can.”