Dear Texas, please keep this strange nastiness to yourselves, thank you. For some unknown reason, worms have infested the water of a Houston suburb, clogging faucets and sprinklers and startling homeowners[1]. 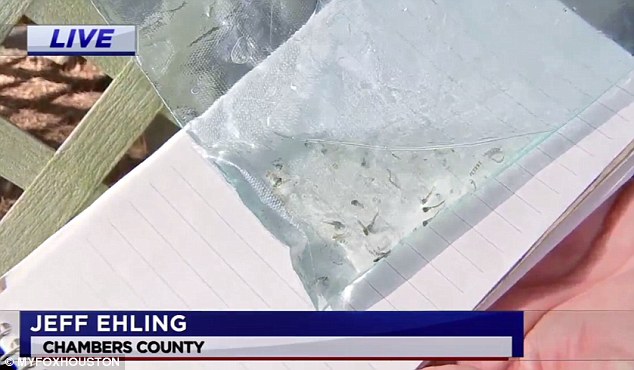 Residents of a small Texas town were appalled this week when they awoke to find tiny worms had infiltrated their tap water.

Dozens of households in the Houston suburb of Old River-Winfree found the little red critters wriggling in the bath water and tea kettles starting Tuesday morning.

Some even said the problem was so bad, the worms were even clogging faucets and sprinklers and the whole town is now demanding answers.

The issue has been going on for several days and started right around the time local provider J&S Water reported a power outage during which equipment was damaged.

The company flushed the system and issued a boil water alert Tuesday, but claimed they never found any worms at their plant.

J&S said they’ve tested their water multiple times and that the worms must come from another source such as pipes.

‘For the record, we have replaced our pipes over and over again and it is PVC pipe. There’s nothing coming from our pipes,’ said Tara Miles.

Around thirty residents of the subdivision in town gathered at the J&S facility on Wednesday, many of them holding plastic baggies and water bottles filled with the unwelcome visitors.

The town’s mayor was there to ease tensions and offered free bottled water and told residents where they could shower at an unaffected city facility.

‘It’s not good enough but what can you do,” said Old River-Winfree Mayor Joe Landry.

They need to get a handle on this and stop it from spreading. Texans around this area also need to keep their eyes peeled and make sure to test your water regularly until this bizarre situation blows over.