31 year-old Raz Halili is one of the first responders who began rescuing people after Hurricane Harvey ravaged Texas and has gained quite a following for his heroic deeds.

The fact that he is absolutely, utterly, completely gorgeous and looks like he was chiseled from stone by the hand of a master craftsman.

But you know. Whatever. 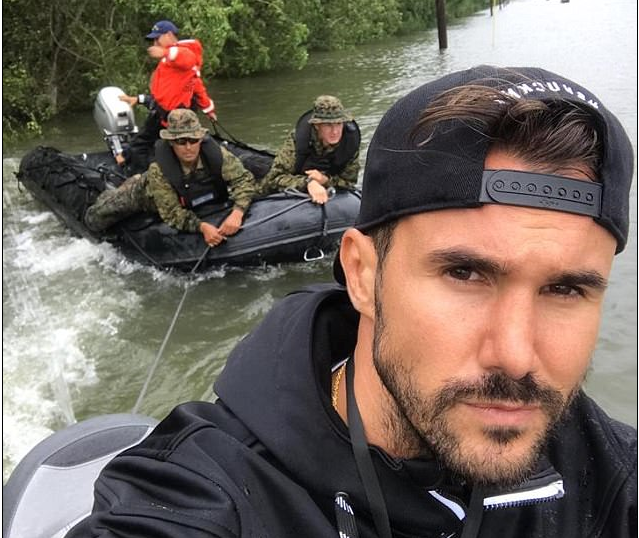 He has been dubbed “RescueBae” by adoring women on the Internet, who I’m sure would love to be rescued by someone who looks like he just stepped out of a Calvin Klein ad.

His photo began to circulate around the Internet when one Texas resident, Facebook user Ariel Marie, posted it in an attempt to track down the attractive rescuer.

“This just made my day better,” she wrote. “Lookahere Mr. Chase, (I don’t even know if that’s ya real name) I’m gon find you!!! Oh yes I am!!! You don’t even know how much ya selfie just blessed me. I’m in love with you MAN!!!! Whichyo alligator-taming, snake-eating, bayou-riding self!!! #CajunNavy #BayouBoys #PleaseRescueMeAgain #IfIrmaComeToTexasImCominToYou #HotWhiteChocolate.”

When asked about the social media post, Halili said that he believes the “kind girl” saw the good he was trying to do in providing disaster relief to the many victims of Hurricane Harvey and – in an attempt to make light of what is very clearly a dangerous situation – used the humorous hashtags which he believes “sparked” the madness.

Halili and his cousin, Gezim, used refrigeration trucks from their jobs, jet skis and boats to rescue people who had been left stranded in their homes after the hurricane dropped record amounts of water on the people of Texas. They worked day and night to provide whatever help they could, aiding in various relief efforts.

“The worst of destruction we saw was in the Port Arthur area, the nursing homes were flooded with high water, patients waiting to be moved by boats to dry land. So many homes/apartments completely flooded out,” he said of the disaster. “During all this madness, there were also so many others helping along with local, state officials. It was beautiful to see people helping others out of the kindness of there heart without regard to race, religion or political party.”

And then he said something that is going to melt the heart of every patriotic female out there, single or otherwise.

“I believe this is the true spirit of America. In all it was very gratifying to be able to help out in the aftermath of Harvey.”

Yep. That’s it. I’m about to summon myself a hurricane.