Before I tell you about this priceless moment… let me once again insert myself briefly into the story. When we moved to Oklahoma, one of the few things I really learned to love was Whataburger. I have never seen more friendly or helpful people, not to mention their food is killer. They are just fantastic and when I move back west shortly, I will miss them. But I won’t be the only one.

One of the first responders in Texas for Hurricane Harvey was a New York firefighter. He has never had the extreme joy of eating at Whataburger. His expression and the sheer delight on his face after biting into one of their legendary burgers is priceless. Whataburger got started in Texas. They are a state treasure. You don’t get better advertising than this right here. Right there with ya bud. 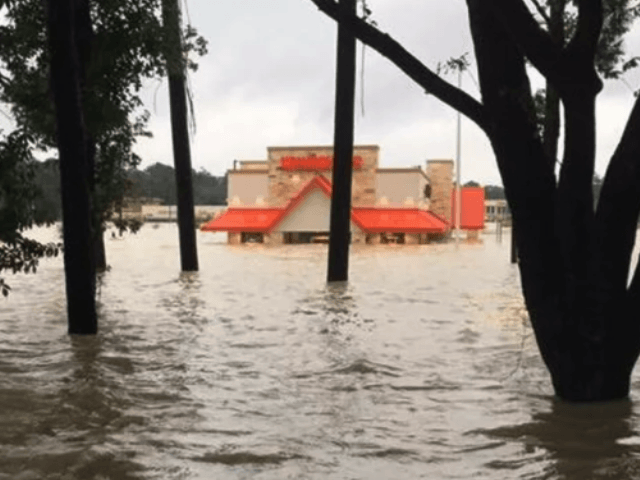 Whataburger operates over 700 stores in Texas. I don’t know how many are here in Oklahoma, but they are loved here just as much. They are definitely on a par with In-N-Out Burger. They set up a food service operation for Hurricane Harvey relief workers. ‘Popular’ doesn’t begin to cover their food. The firefighter was skeptical: “Texas guys wanna tell me ‘This is a burger,’ this is the official Texas burger,” he said as he prepared to take his first bite. “I don’t think so, but we’re gonna see right now.” Another New Yorker can be heard off camera saying, “Forget about it.”

“Its a double,” he marveled looking at the burger. “Oh, everything’s big in Texas, right?” He then bit into the wonder of a Whataburger. “Mmmm,” he exclaimed after tasting the burger. He grinned and said, “That is a good burger,” while pointing as his meal. He grinned at the camera and gave a big thumbs-up while nodding his head. I’d say Whataburger has won another fan for life. I foresee franchises in New York shortly.

While serving first responders we ran into a NYer who got his first sweet taste of Whataburger pic.twitter.com/AzYbryw8cn[2]

Whataburger posted a message to their employees and customers saying how moved they are by the love and support Texas has received during and after Harvey. They pledged to be there for everyone and weather the storm with them. Whataburger is just awesome.