I can certainly relate to this video.[1] I think we all can. How many times have you driven around a parking lot forever looking for a parking place? We call it ‘vultching’. Then you finally find one and some asshat has taken up two spaces to where you can’t park. Or… you park between the white lines and go in to shop. You come out and some jerk has parked right up close to the driver’s door and you can’t get into your car. You are forced to either crawl through the passenger side or through the back of the car. Infuriating and embarrassing. Well, two Jeep drivers decided to make an example of just such a troll.

A guy who was driving a pretty little red Mercedes compact SUV parks, taking up two spaces at Best Buy. Not unusual… this has happened to me personally at Best Buy. Two guys in Jeeps that have been frolicking in the mud park on either side of the Mercedes, right up close and personal. Then the drivers hide to video the reaction of the driver as he comes out to his car. The guy is furious, throwing his hands in the air and probably saying words that would make people blush. He kicks the tires of both Jeeps. I was grateful he did not have a baseball bat. In the end, he was forced to open the back of his car and ungracefully crawl through to the front to back up and drive off. 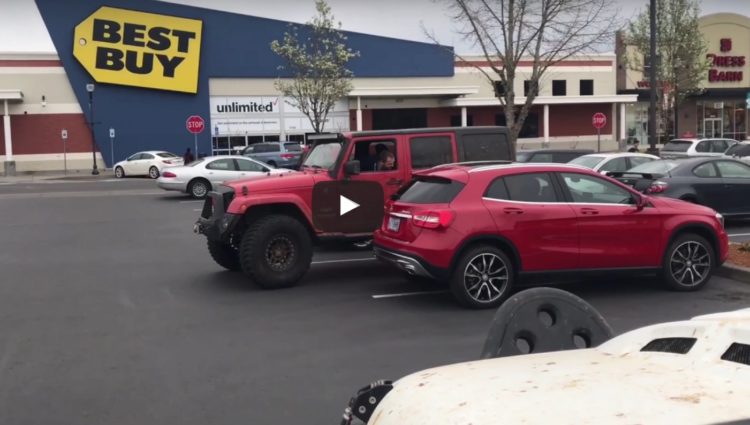 Any motorist who has attempted to park in a busy lot knows the frustration of seeing a single car taking up two spaces.

However, a prank video[3] taken by Instagram user Rough Jeep decided it was finally time to teach these inconsiderate parkers a lesson — and maybe prevent future occurrences.

After seeing a red Mercedes Benz taking up two parking spots in front of a Best Buy, the pranksters decided to block him in, so that when he returned, it would be impossible for him to open the car doors.

As the Benz driver returns, he notices that his car has been wedged in.

After throwing his hands up in dismay, he then proceeds to kick the front tires of both Jeeps.

Seeing no other way to get into his vehicle, the unknown driver pops open his trunk and crawls through the back. It takes him a few moments as he struggles to get through to the driver seat.

The pranksters, who have been hiding behind a nearby car, can be heard laughing as the Benz driver mumbles frustratingly under his breath.

The guys videoing the whole affair were laughing like teenagers. There is some conjecture on whether this really happened or was staged, but I can absolutely see this transpiring. All of us have been ticked off by the inconsiderate parking hog in our shopping adventures. Another reason to use the Internet. Fortunately, no one’s car got dinged or harmed in this episode of Parking Lot Manners 101.

The pranksters who did this are called Rough Jeep on Instagram. Some comments on Rough Jeep’s Instagram account seem to think the video was staged, while others think the footage is a humorous attempt at educating inconsiderate drivers. It doesn’t really matter… it makes a solid point. Consider others when you park and don’t be a jerk. The Rough Jeep Instagram account has more than 260,000 followers and regularly posts video footage of Jeeps off-roading. The group has posted videos in the past of getting revenge on bad parkers. So this is a thing for these guys… I’m not sure I can blame them and part of this is deeply satisfying.