Hundreds of Men Show Up to Mentor Boys at Texas School, No One Expected This!

This is so cool. Approximately 600 men showed up for a “Breakfast with Dad” event at a Texas middle school when officials put out a call for assistance. The school officials wanted to make sure they had enough male mentors there for the program and they sure did. Officials at Billy Earl Dade Middle School planned a “Breakfast with Dad” program for their students in December. 150 boys signed up. Officials were afraid that some of the boys would not have men who would attend with them. They didn’t want any boy left out of the program, so they called for help. And help came. The response was overwhelming.

Dade Middle School officials had hoped they could get 50 men to show up for the event. But their jaws hit the floor when nearly 600 showed up. “The unexpected influx of interest led the team to move the event from the cafeteria into the gymnasium so they could house more guests,” Dallas blogger Stephanie Drenka wrote. “I will never forget witnessing the young students surrounded by supportive community members. There were so many volunteers, that at times I saw young men huddled in the center of 4-5 mentors. The look of awe- even disbelief- in students’ eyes as they made their way through the crowd of ‘Dads’ was astonishing.” 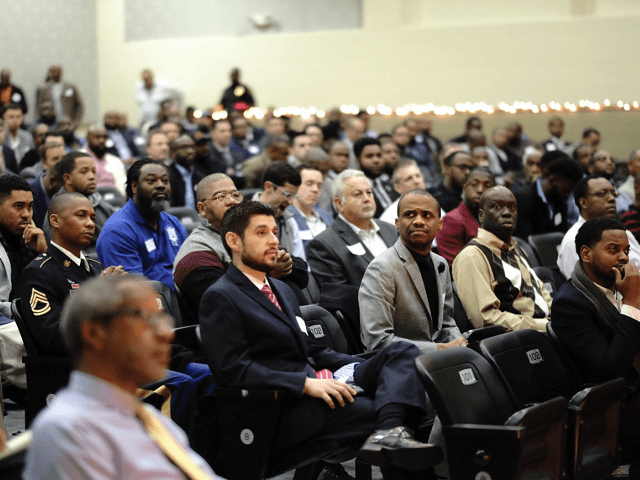 I can’t even imagine what that must have meant to those kids. It kind of chokes you up. The school’s principal, Tracie Washington, told those gathered for the event, “This turnout is a testament to show [what happens] when a school and a community come together.” Yes, it is. This is the way it should be. When planners initially requested 50 men to spend one hour on December 14th to provide mentoring for their students, they never imagined this would happen. Many of the 600 who arrived for the event were volunteering for the first time.

One of those that attended was Dallas ISD Assistant Police Chief Jason Rodriguez. “Words cannot describe the impact mentoring youth can have on both you and your mentee,” he tweeted. “Powerful to see a community of fellow men and fathers come together to wrap their arms around [our] young men. Thank you for having me out.” These are good men who really care about these kids.

Event planner Kristina Chäade’ Dove is a senior manager for Big Thought, a non-profit organization that works to improve educational opportunities for students. Dove summarized the event in a post on her Facebook page. “All honor goes to those 600 men who showed up on that day to give America and the world hope for the future,” she wrote. “It’s because of your time, service and intentionality that we have been able to shine an international spotlight on the goodness and care for others that the majority of mankind possesses.” Because of the massive success of the program, Dalls ISD officials are looking to expand the Breakfast with Dad to more schools. That’s a terrific idea.

Words cannot describe the impact mentoring youth can have on both you and your mentee. Powerful to see a community of fellow men and fathers come together to wrap their arms around or young men. Thank you for having me out. pic.twitter.com/2fTicFpzws[2]