Liberal Atheist Asks Harvey Victims Why Their God Is Doing This To Them – Texas Responds! 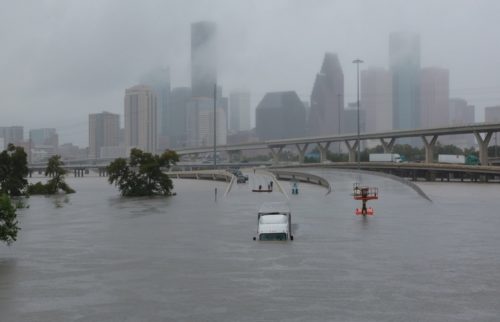 When tragedy strikes, there are always those willing to compound it by piling on. And Hurricane Harvey is no exception. As if it isn’t bad enough that at least 30 people have died and the entire greater Houston area is dealing with flooding, power outages, stranded people and pets, medical emergencies and the need to deliver food and water to displaced people and families; a nasty Internet troll thought he needed to add his inconsiderate two cents. @Onision tweeted out at Houston area Christians in general, the following:

“There are a lot of Christians in Texas, so any of you want to explain your God doing this?”

The responses from Christians and others took him to task for what was an insensitive, uniformed, rude comment. See responses below.

.Just curious, why are you using this horrible moment to further devistate those of us that believe in a higher power?

The idea that the victims of a natural disaster should have to defend God’s reputation is ridiculous. Does God need people to protect his image? Of course the answer is a resounding ‘no’. And for anyone who wants to know where God is in all this, simply look at all the people mobilizing to rescue, help, feed, house, clothe, care for and protect both people and animals. That is more than enough evidence that God is at work in Houston. God tells us in His word to, “Feed the hungry, and help those in trouble. Then your light will shine out from the darkness, and the darkness around you will be as bright as noon. The Lord will guide you continually, giving you water when you are dry and restoring your strength. You will be like a well-watered garden, like an ever-flowing spring. Some of you will rebuild the deserted ruins of your cities. Then you will be known as a rebuilder of walls and a restorer of homes.” ‭‭Isaiah‬ ‭58:10-12‬ ‭NLT‬‬

That is where God is. He is the rebuilder of walls and a restorer of homes. And that is exactly what He will do in Houston as people step up and help their fellow human beings and animals who have experienced the tragedy of Harvey. Helping one another is a reflection of the character of God. And it is a beautiful sight to see.

So, @Onision, you asked about what God is doing in the aftermath of Harvey? He’s walking among those who need Him and providing for those who need help, in the form of generous time, money and blood donations. He’s in the strong shoulders of a man carrying a woman and her baby to safety. He’s on the boats picking up frightened cats and dogs. He’s in the relief centers handing out food and water. He’s playing board games with scared and displaced children inside shelters. He’s in the loving hands of medical personnel helping elderly people to get the attention they need. He’s in the eyes, hands, hearts and feet of every person who gives, goes or prays for the victims of Harvey.

God is among the people He loves. God is in Houston.

“The godly will rejoice in the Lord and find shelter in him. And those who do what is right will praise him.” ‭‭Psalms‬ ‭64:10‬ ‭NLT‬‬