Try as I might[1], I just can’t stir up any sympathy for this woman. You remember Rachel Dolezal, right? She used to be a former leader for the NAACP. She’s a white woman, who claims she identifies as black. As far as I’m concerned, she has mental issues. After it came out that she really wasn’t black, she got fired from the NAACP. Now, no one wants her and she has become a punchline. She’s also broke, on food stamps and just about homeless… she either already is or will be next month according to accounts. She has been offered work though… in porn. Geez. Times are tough for habitual liars.

From The Guardian’s interview with Dolezal: “Today Dolezal is jobless, and feeding her family with food stamps. A friend helped her pay this month’s rent; next month she expects to be homeless. She has applied for more than 100 jobs, but no one will hire her, not even to stack supermarket shelves. She applied for a position at the university where she used to teach, and says she was interviewed by former colleagues who pretended to have no recollection of having met her. The only work she has been offered is reality TV, and porn. She has changed her name on all her legal documents, but is still recognised wherever she goes. People point at her and laugh.” She did this to herself… again fresh out of sympathy.

Saturday, The Guardian[3] (UK) released an interview with disgraced former NAACP local leader Rachel Dolezal. Dolezal, you’ll remember, was a typical leftist race-baiter who spent her days talking about white privilege…until it was revealed that she is white. She maintained that while she might be genetically white, she identified as black. She was promptly fired by the NAACP as well as the local university employing her.

Now, according to The Guardian, she can’t get a job, she’s nearly homeless, and she’s living on foodstamps. She was assailed as “mentally ill” and guilty of participating in “blackface.” Dolezal explained, “I’m this generic, ambiguous scapegoat for white people to call me a race traitor and take out their hostility on. And I’m a target for anger and pain about white people from the black community. It’s like I am the worst of all these worlds.”

Here’s the sad irony: if Dolezal had believed she was a white man instead of a black woman, she’d be hailed as a hero. As it is, she calls herself a “pan-African, pro-black, bisexual.” But that’s not good enough. She should have called herself a man. She’d spend her days being feted by the media as a civil rights icon. She’d be called a man because she deemed it so. But if she called herself black, she had to be tossed out on her ear.

Dolezal claims that she said she was black because she has three younger black siblings adopted from Africa. She started dressing and doing her hair as if she were black. She’s now estranged from her family. I don’t think her parents want anything to do with her and if I recall correctly she has been in an abusive relationship as well. This woman needs professional help of the mental variety. She’s massively screwed up in the head.

The Guardian points out that Dolezal identifying as black is similar to transgenders identifying as the sex they aren’t. Again… all of that is a form of mental instability. She finds herself in an unpopular leftist position as gender is more fluid than race these days. Ben Shapiro is right… she’d be much better off identifying as a white man, instead of a “pan-African, pro-black, bisexual.” Better yet, she could just be what she is and deal with it. 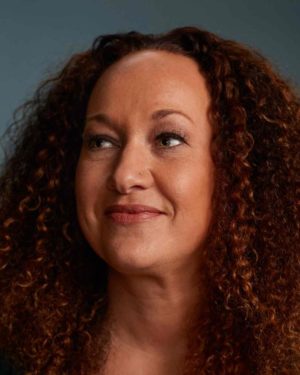