I simply don’t get this one.[1] This actually happened two years ago, but this kind of thing is getting ever more prevalent out there in schools. This girl went to school in leggings and a t-shirt and I see nothing inappropriate about her dress. Yet, the school sent her home saying it was just that. Her sister was so incensed, she took to Facebook over the injustice, citing body shaming. I doubt it was that as this is a pretty girl and she is not showing anything suggestive here. But the school’s reaction is way out of line. However, I would tell her sister to knock off the ‘rape culture’ crap.

This is why parents home school their kids. It was one of the reasons I home schooled mine. Do you see anything untoward about the way this girl is dressed? I’ll bet it is the leggings that caused the upset here. Perhaps the dress code at the school forbids them, which is silly, but every school is different. This has gone viral as I’m sure most people are as perplexed by it as I am. 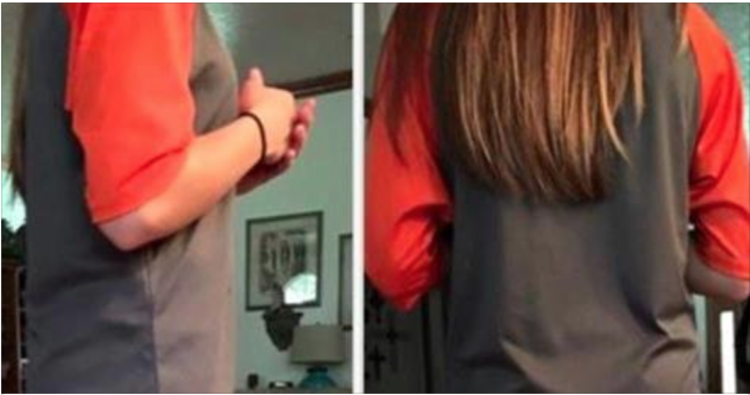 On April 2, Erica Edgerly uploaded a photo of her sister Macy Edgerly[3] on Facebook. In the photo, Macy was wearing an outfit that got her sent home from school for being inappropriate.

Appalled by the administration’s poor judgement, Erica voiced her opinion on the school’s decision to send her sister home:

Today, my sister was sent home from school for wearing the clothes in the picture below. And I'm sorry but I have to…

So far, the photo has garnered over 60,000 [At time of publishing] shares on Facebook. And nearly every commenter on the photo sided with Erica and Macy.

Things have certainly changed since I was in school. Unless you came in dressed like a stripper, they didn’t give a crap. Now, everything is fodder for social politics. This is why I would only home school your children or put them in a private school if you can afford it. If the students are that sex-obsessed at that school, you don’t want your child there in the first place.

I would love to see their dress code and hear why they thought she was dressed inappropriately. Many times a school won’t even comment on it, they just send the kid home. These are probably rules handed down by the School Board… probably a ban on leggings. Whatever happened to jeans anyway? Just a random thought as that is what most kids wore when I was growing up. At any rate, I think this is way overblown and a severe over reaction on the part of the school.