If you needed evidence that everything in Australia wants to kill you, eat you, or both, there it is.

Sam Kanizay, 16, thought that he would just enjoy an easy day at the beach, but his fun in the sun quickly became a nightmare after discovering that not all creatures in the briny deep are your friend. 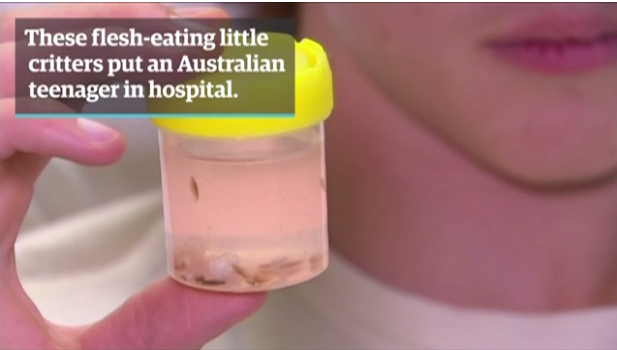 Alistair Poore, University of New South Wales marine invertebrates expert, says that he’s never seen a case like this before in his life. He believes that the creatures capable of causing such damage are known as “sea lice,” though he claims that a large number of the flesh-hungry invertebrates would be needed to cause such damage.

When the teen’s father couldn’t stop the bleeding, they ran him to the hospital where the staff had no idea what on Earth could have caused such a horrifying scene.

The next night, Kanizay returned to the spot with a pool net of meat and managed to catch the tiny culprits.

If it were me, I don’t think I’d be comfortable going into the water with critters like that swimming around. They’re like smaller versions of piranhas and I don’t know of any sane person who wants to go swimming with them. Also, the more I hear about the things that live in Australia, the less I want to go there. I don’t know that I want to be eaten alive by the sea life.