Unable to escape and facing death in their 23rd floor flat, Gloria Trevisan and Marco Gottardi made the last, heart-rending[1] final phone calls to their families back in their home country of Italy.

In the last moments before the smoke and fire overtook them, the dedicated couple told their parents they wanted to say their piece and goodbyes, with Miss Trevisan telling her mother:

‘Thank you for what you have done for me.’

Her fiancé, Mr. Gottardi, attempted courageously to play down his fears, but the couple eventually had to admit that it was over as they could see the smoke whirling around them and the fire crawling up the stairs. 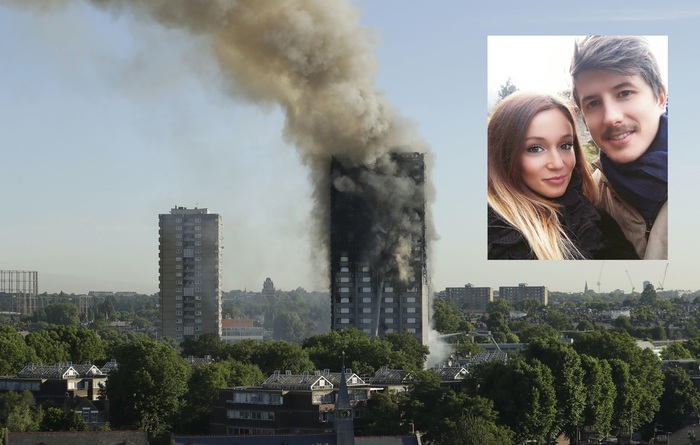 Their final, unthinkably affectionate conversations left their parents with utter despair – they knew they were talking to their children for the last time, a lawyer for their families said.

The two victims of the aforementioned were both architecture graduates and moved to London three months ago to look for work and were charmed by the views over the capital they enjoyed from their 23rd floor flat.

Miss Trevisan, 27, who went through and completed her Master’s degree in architecture at Venice University last year, posted many photographs of the urban vista on her Instagram account, including rainbows that would stretch across the landscape.

June 6, there was one word that was posted: ‘Spettacolo [spectacular].’ But it was only one week after it was posted that the blaze would destroy their home and them as well.

‘In the first call Marco told us not to worry, that everything was under control, that basically we must not worry. He was trying to minimize what happened, probably not to unsettle us. But in the second call – and I can’t get this out of my head – he said there was smoke, that so much smoke was rising.’

‘We were on the phone until the last moment…At 4.07am he told us their apartment was flooded with smoke and that the situation had become an emergency. The communications broke down and from that moment on we no longer had any contact. The phone didn’t pick up again.’