This is one feisty woman.[1] In the UK, a young woman was riding her bike, minding her own business. Two men pulled over by her in the road in their van and started catcalling her. A motorcyclist caught it all on his helmet cam and it got confrontational in the extreme. The driver wanted her to take his number and he tried to touch her. She kept telling him to go away and that he was an old dog. This woman is not the passive type… when the van took off, she followed on her bike and so did the motorcyclist.

She rolled on up to the van that was stopped, took a hold of the rear view mirror on the passenger side and yanked it clean off. She then rode victoriously off. The motorcyclist stopped long enough to tell the guys they deserved that and that they were scum. I just love happy endings. That’s exactly what those men deserved. Actually they deserve worse for advancing on the woman on a street at all and in a dangerous manner. What a couple of jerks.

No matter one’s location, one thing that’s found practically everywhere is catcalling. And regardless of where it occurs, it’s universally unwanted and unnecessary.

Whether or not someone has actually gotten a date this way has yet to be seen, but, for some reason, some guys think it will magically work.

In a recent video[3] from the United Kingdom, a woman riding a bicycle in London finds herself being objectified by two men in a gray van.

The conversation already appeared to be in full swing when a motorcyclist with a camera on his helmet pulled up behind the van.

One of the men in the truck is heard shouting:[4]

“You want my number?”

Instantly, the biker got upset and slapped the front of the vehicle.

The woman shouted at the men to “go away”; however, they only continued to become more vulgarities towards her. The man said:

“That’s not very lady like is it? What charm school did you go to?”

After a fiery back-and-forth, the man then asked, “you on your period?” before reaching his hand out the window in an attempt to grab her:

She also flipped these dirt bags off and I don’t blame her. What makes these idiots think that this is anywhere near okay? And they aren’t embarrassed of their actions at all. This surely isn’t the first woman they have accosted this way and one wonders what it will take to make these animals knock it off. The police probably wouldn’t do much either in a case like this, but ask yourself how you would feel if that was your daughter, sister, wife… Would you just let it go?

I’m sure when the driver took off, he thought he would never see this little firecracker again. Boy, was he wrong. She literally hunted them down to make her statement with their rear view mirror. They are lucky she didn’t have a baseball bat. I’ll leave that to your imagination. I’d bet they aren’t used to women fighting back like that. Good for her. Of course, there is always the chance this was staged and not real… but I really hope it happened just this way. 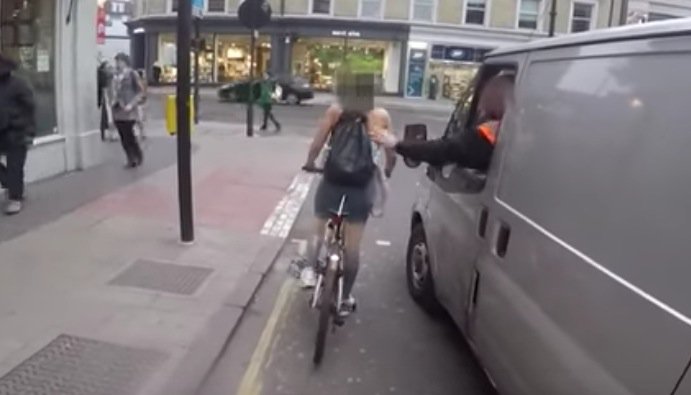