An airport cop has been suspended after being caught on video beating a United Airlines passenger who refused to give up his seat for airline staff.

The 69 year-old passenger could be seen being slammed into an armrest and knocked unconscious. Afterward he was dragged from the airplane by his arms while bleeding from the mouth. 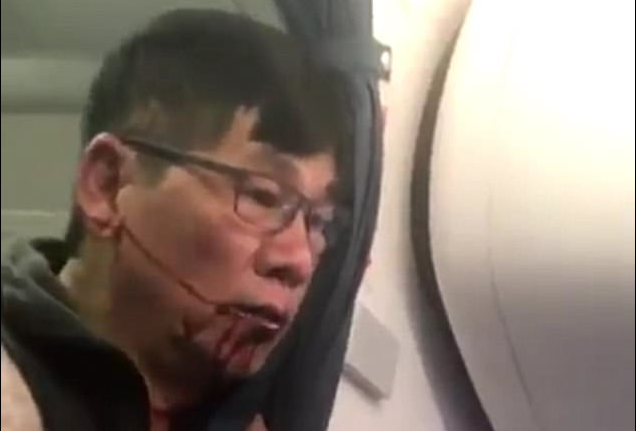 After discovering the flight was overbooked and needing places to seat the staff, the 69 year-old man was selected to be bumped off the flight.

The airline’s CEO apologized on Monday following the publication of videos that showed the man being assaulted by the officer and then mumbling “kill me.”

The Daily Mail[2] believes that that particular video was filmed after another clip which appears to show the man breaking free from the officers and running toward the plane saying “I need to go home.”

The CEO also urged the man to come forward and discuss his version of events with them in an effort to resolve the situation.

‘Our team is moving with a sense of urgency to work with the authorities and conduct our own detailed review of what happened. We are also reaching out to this passenger to talk directly to him and further address and resolve this situation.’

The aviation department released[3] a statement on the assault:

‘The incident on United flight 3411 was not in accordance with our standard operating procedure and the actions of the aviation security officer are obviously not condoned by the Department.

‘That officer has been placed on leave effective today pending a thorough review of the situation.’

There is absolutely no excuse for this behavior. Let’s hope that United is forced to own up to this horrifying incident and compensate the man who was brutally attacked by the airport police. While money isn’t going to fix the situation, it would be a good start.