VIDEO: Chimpanzee flings poo at a grandmother visiting his zoo enclosure and hits her on the nose 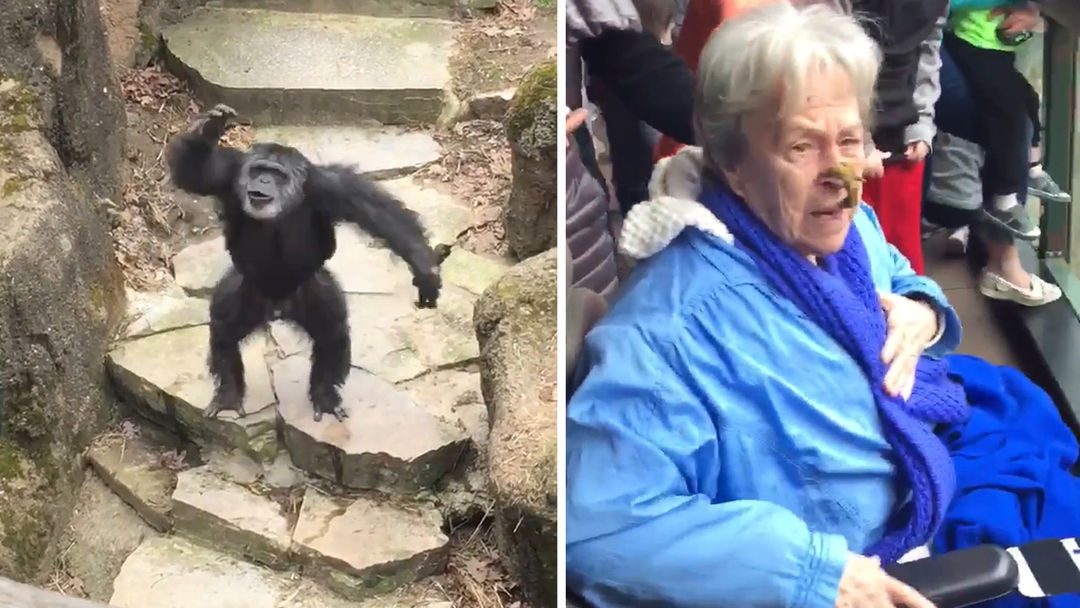 This nice family thought they were going to have a wonderful time at the zoo. But, the animals in the chimpanzee exhibit started acting up and threw stinking projectiles[2] into the audience. Most of the people dodged out of the way, but a grandma in a wheelchair got caught in the crossfire and had poop hanging from her nose.

The chimp swayed up and down on the cement steps of his enclosure at John Ball Zoo in Grand Rapids, Michigan, then began throwing feces into a crowd of visitors.

The stinking projectile hit the elderly woman right in the face and was left hanging from her nose.

The other visitors burst out laughing while the grandmother looked surprisingly unimpressed.

Comments either felt sorry for the grandma or had a good laugh at her expense. Personally, I am grossed out by the picture with the turd hanging off her nose. It’s so real that I can almost smell poop as I watch this video. I guess the lesson for all of us is to not piss the animals off at the zoo and treat encaged animals the same we would treat any animal… especially knowing that researchers find poop-throwing by chimps a sign of intelligence[3]. This is real:

A lot of people who have gone to the zoo have become the targets of feces thrown by apes or monkeys, and left no doubt wondering about the so-called intellectual capacity of a beast that would resort to such foul play. Now however, researchers studying such behavior have come to the conclusion that throwing feces, or any object really, is actually a sign of high ordered behavior. Bill Hopkins of Emory University and his colleagues have been studying the whole process behind throwing and the impact it has on brain development, and have published their results in Philosophical Transactions of the Royal Society B.

Hopkins and his team have focused their research on chimpanzees, mainly due they say, to the fact that chimps are our closet living relative and that they are the only other species besides humans that regularly throw things with a clear target in mind. He and his team have been watching chimps in action for several years and comparing their actions with scans of their brains to see if there were any correlations between those chimps that threw a lot, and those that didn’t or whether they’re accuracy held any deeper meaning. Surprisingly, they found that chimps that both threw more and were more likely to hit their targets showed heightened development in the motor cortex, and more connections between it and the Broca’s area, which they say is an important part of speech in humans. The better chimp throwers, in other words, had more highly developed left brain hemispheres, which is also, non-coincidently, where speech processing occurs in people.

They say that these findings suggest that the ability to throw is a precursor to speech development in human beings. Bwahaha hahaha ha. There are some kinds of research that I just have to laugh at.