Humans learn lessons by two ways… by learning from others, or learning by experience. Which one you learn by really depends on how stupid you are. No seriously. For the lack of a better term, your stupidity will be the deciding factor on whether you learn the easy way, or the hard way. Take this man for instance… 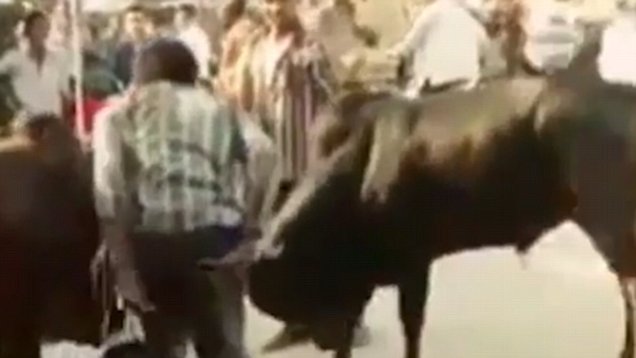 This particular dummy chose to lean the hard way when he was tossed into the air after he tried to play the peacemaker to a couple of massive, powerful and deadly bulls. The whole circus was caught on camera for the viewing pleasure of the folks on the Internet and it took place in the middle of a crowded busy road all the way in some Asian country.

During this short footage, we first notice that these bulls are as unruly as they could get, using their horned heads to batter and try and gore each other. This must not be an out of the ordinary scene for this place because people don’t seem to care one bit.

Then all of the sudden out of nowhere, as if he was some type of drunk superhero from somewhere no one wants to go, this guy sees an opportunity to do some good in the animal kingdom and stumbles around, then runs right for the bulls to lend a stupid hand. Now, this is when someone who appears to be the man’s friend, attempts to do the only logical thing in this video and tries to hold back his friend from meeting his maker, but true to his stupid choice, the man shoves him off and continues forward, placing himself between the two bulls and shoving their heads back away from each other.

But as you no doubt have foretold this man’s doom, these bulls just seal it as they didn’t much care to be interrupted. So, as one bull distracts the would be hero, the other aims an attack right behind the man, sending the drunk idiot flying through the air. Know we could feel sorry for this man…or we could save our compassion for those that, I don’t know, DON’T go around drunk, trying to fight off two fully grown bulls from one another, hmmm?