VIDEO: Little girl asks to be hit with a real Thai kick. She gets her wish

I think every man had a period in their life when Kung-Fu movies was life. It took over everything and was everything to all of us. We couldn’t wait to test out moves we learned by watching Bruce Lee, Jackie Chan or Jet Li. We loved them all, but we grew out of that phase…Well, maybe not all of us. We still like the fighting, maybe not actual fighting, but many of us won’t think twice about dropping $100 on a Pay-Per-View fight that lasts one round.

Mixed Martial Arts (MMA) is the flavor of the day and one of the more prominent arts of fighting in that ‘mix’ are the vicious Muay Thai kicks. 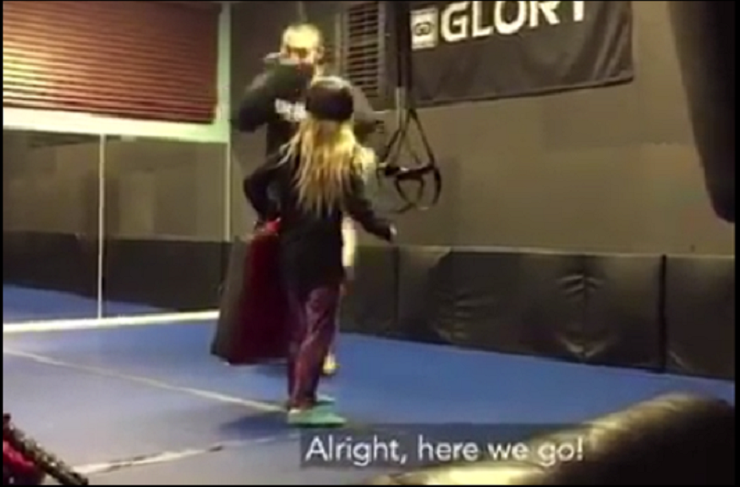 If you were to have an average sized Muay Thai fighter kick you with everything they got and you were not trained to handle the blow, you would want to be dead.

Some sources have said that the Muay Thai roundhouse kick has so much kinetic energy behind it, the closest example of a comparison would be a baseball bat swinging at 480 lbs of force per strike on the low end – with some scientific tests ranging the kicks from anywhere between 1400 and 2300 lbs. Now that is depending on the kick being used.

To put that further into perspective, that exceeds the force of a .45 ACP round hitting a target at 800 lbs of force (if it doesn’t pass through the target). The reason people aren’t shooting other people with Muay Thai strikes is because the area of contact is much wider than a small bullet, which tears through the skin.

So, just how powerful are these kicks? Well, funny you should ask…

This is absolutely hilarious to me! I have no idea what the relationship between these two are – could be father and daughter, uncle and niece, or even brother and sister. What I do find hilarious is that in the end, she shakes off being totally kicked into the air, laying out sideways on the mat – and LAUGHS about it! Now I can pretty much guarantee that the people on social media would have a fit and rage about how disgusting this fighter is. “How could you kick a little girl?,” “You are not a real man!”… we all know those trolls. 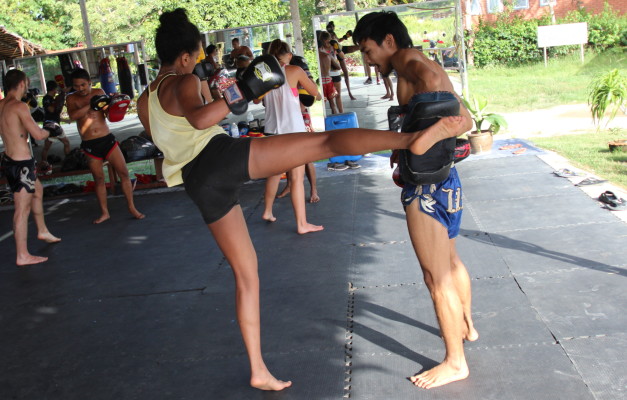 The truth is, there was no better lesson to be given. The girl sent out a challenge and she receives exactly what she asked for – and came out of it laughing.

The man’s kick didn’t seem at full power, no doubt because he wasn’t looking to hurt the girl. But you can see, even with such a small body, just how powerful these kicks can be.