Scary video shows rancher pulling a 5 ft. SNAKE from inside a toilet with a mop handle & string

Normally these kinds of videos come from some other part of the world, but video of a snake the size of a small human being pulled from a toilet in Texas recently went viral and it has me seriously concerned.

I am the queen of worrying about things that may never, ever happen to me, but that doesn’t stop me from checking for spiders underneath my toilet seat before I sit down, or running in and out of elevators as quickly as possible to avoid being shut in the doors. 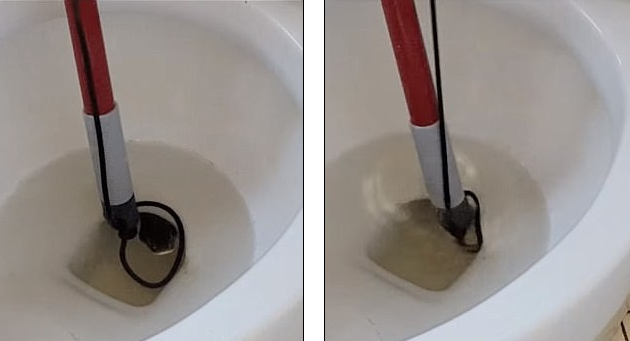 Workers were cleaning out a house that had been abandoned for quite some time and discovered an unwelcome visitor in the pipes of the toilet.

Ben Tedrick had his friend film the moment he wrestled a 5-foot-long snake out of the toilet with nothing more than a broom handle and a piece of string. This is a task most often left to professionals, but sometimes you gotta do what you gotta do.

He said that while he would normally have let the snake get out on its own, it seemed that the slithery critter had become stuck in the pipes and was unable to escape.

When the snake passed its head through the make-shift noose and Tedrick tightened it, pulling the legless animal out of the pipes and into the cold, harsh world.

You can see that he was clearly struggling to get the snake out. Apparently it liked its home in the water, and it wasn’t going to leave without a fight. Eventually it was fully removed and taken outside, where it was placed into a bag and later released into the wilderness.

“I had him out about three feet when he coiled up again and he pulled me forward. I was afraid his head was going to pop off, but he was perfectly OK,” said Tedrick, who was impressed by the snake’s strength.

It is believed that the snake in question is a rat snake, which is non-venomous and hunts rodents. They can be found in the southwestern United States. Apparently it had gotten cold and sought shelter in the house, and was disturbed by the men attempting to clean out the location.

I don’t care what kind of snake it is, I don’t want it anywhere near where I am going to be sitting. I’m glad they got it out safe and in one piece, and it was able to resume its life somewhere else.