St. Louis University removed his statue because the Catholic priest represented white supremacy. Don’t worry, folks, they have a heck of a replacement for you – a statue celebrating the apparently non-racist Ferguson rioters[1]. Uhm, OK? I really have no clue at some times if we will survive as a species…. 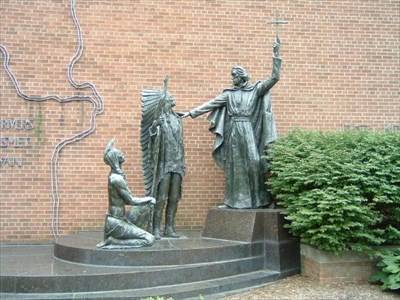 Saint Louis University has removed a statue on its campus depicting a famous Jesuit missionary priest praying over American Indians after a cohort of students and faculty continued to complain the sculpture symbolized white supremacy, racism and colonialism.

The statue features famous Jesuit Missionary Pierre-Jean De Smet S.J. praying over two American Indians dressed in traditional clothing. Last Monday, just two days after graduation, it was removed from the location it has called home on campus for decades.

A university spokesperson told St. Louis Magazine the statue will be placed within the “historical context of a collection that’s on permanent display in our SLU Museum of Art.” The statue is set for the museum’s “Collection of the Western Jesuit Missions.”

“In more recent years, there have been some faculty and staff who have raised questions about whether the sculpture is culturally sensitive,” SLU spokesman Clayton Berry said.