When Thousands Were Stranded in the Atlanta Airport Sunday, Chick-fil-A Came to the Rescue [VIDEO]

Once again, Chick-fil-A rides to the rescue. There was a massive power outage and cancellations yesterday at Atlanta’s Hartsfield-Jackson airport. Chick-fil-A is normally closed on Sunday, but they called their employees and took food to the airport. This is the busiest airport in the world. They gave out yummy food to stranded travelers both in and outside the airport.

“The mayor called about 10 pm and asked for assistance,” a spokesman for Chick-fil-A confirmed in a statement obtained by Fox News. “We immediately mobilized staff and team members who live and work near the airport, and they began making sandwiches and delivering them to the EOC (emergency operations center). City and airport officials then distributed more than 5,000 sandwiches to passengers who were stranded due to the power outage.” 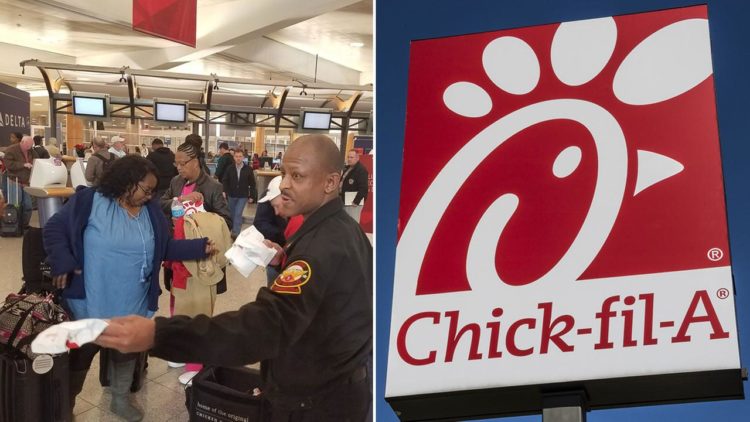 I love Chick-fil-A… good food and great people. They really care about others. We’ve seen it here in Texas and Oklahoma when disaster strikes. Chick-fil-A CEO Dan Cathy arrived at the airport to personally pass out chicken sandwiches alongside airport and city officials. Chick-fil-A also confirmed they would give out food to passengers who were staying at the Georgia International Convention Center, which opened their doors to stranded travelers following the power outage. What a mess. But for the kindness of strangers…

Mayor Kasim Reed thanked Chick-fil-A for helping people the way they did. They confirmed that over 2,000 meals were handed out to hungry travelers as of 11:30 pm last night. People were very thankful for the food and people took to twitter to praise Chick-fil-A. They weren’t the only ones helping. Dunkin’ Donuts also gave away doughnuts to stranded passengers at the Hartsfield-Jackson airport.

LIGHTS ON and delivering food and water to our passengers! Thank you @dancathy[2] with @ChickfilA[3] for opening on a SUNDAY! #ChristmasMiracle[4] pic.twitter.com/0PlSxHIWj5[5]

Typically, you can’t eat at Chick-fil-A on Sunday. Truett Cathy, the company’s founder and father of CEO Dan Cathy, made the decision so “he and his employees could set aside one day to rest and worship if they so choose.” But exceptions are made in times of need. It’s the Christian thing to do.

This custom is not without its drawbacks. When Chick-fil-A announced in August that they would be opening a outlet at the Atlanta Falcons’ new Mercedes-Benz Stadium, they insisted that they would not be open on Sundays — which is when the Falcons play most of their games. It’s the principle of the thing.

Update: Power has been restored to Concourses A, B, F, T and the @ATLairport[7] atrium. We have provided 2,000 meals so far. Special thank you to Dan Cathy and @ChickfilA[3] for their support. #atlairport[8]

The power was restored to the airport at about 12 am this morning. Vendors started opening shortly after the lights came back on. The power outage was caused by an electrical fire that started in an underground facility and eventually brought down the backup power system, as well. It caused massive chaos. Thank goodness Chick-fil-A was there to help. It made the whole insane scene a bit easier to endure.

I propose that Chick-Fil-A and Southwest team up and hold a conference to teach all other companies how to do customer service. They're the only ones who've figured it out.

This is why we love our @ChickfilA[3] and God continues to bless them. They are a servant and good steward to their patrons.

Shout out to @ChickfilA[3] for providing free food for those stranded at the #ATLAirport[12]. And they are closed on Sundays. Always clutch like Kyrie! ????

When thousands of travelers were stranded at Atlanta's airport due to a power outage, Chick-fil-A — which is known for being closed on Sundays — turned on their fryers to help in the best way they knew how https://t.co/sXKf5opgva[14] pic.twitter.com/9wVdstqwk8[15]