A SUPER-hero’s funeral, that is.

Kyler Bradley[1], 10, lost his fight with cancer last Tuesday and while most of us will never understand the agony that comes with planning the funeral of your child, the entire family stepped in to make it a funeral fit for a hero. 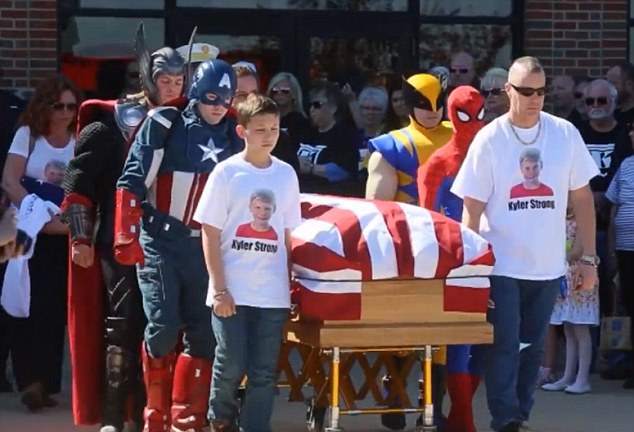 Kyler Bradley, who was diagnosed with an incurable cancer known as Diffuse Intrinsic Pontine Glioma (DIPG) in October, died at home on Tuesday with hundreds gathered outside praying for him.

Yesterday, the thousands turned out to pay their last respects to the young cancer victim who was laid to rest Saturday at Rose Hill Cemetery in Fairfield Township, Ohio.

And Kyler, who the family described as their ‘hero’, was given a very special send off.

Pallbearers for the youngster, who loved superheroes, dressed up as Marvel and DC characters including Spiderman, Captain America and Wolverine, while his father and brother wore t-shirts which read ‘Kyler strong’ with a picture of the ten-year-old.

His coffin, which was wrapped in an American flag, was gently lifted onto a fire truck by the superheroes and military men to be transported to the cemetery.

His mother Rebecca Bradley said that saying goodbye to her son had been ‘unimaginable, unthinkable and unbearable’ at the funeral service at Princeton Pike Church of God.

‘I have loved him from the moment I laid eyes on him to when he died in my arms. We locked eyes and we never let go until his last breath,’ she said, according to WLWT.

She said that planning her son’s funeral had been ‘excruciating’.

‘My heart is heavy and it aches,’ she said in a post on the family’s GoFundMe page. ‘I have a void in my heart!

‘I look for Kyler everywhere. The house seems so empty with only 3 of us living here. I miss him so much. Hard to believe that after we closed his casket for the final time, that I will never get to physically see, touch or kiss him ever again.

‘Why..my child? I am lost and confused…. I love him so much…more than all the stars in the sky!!’

Kyler deteriorated very quickly after he was diagnosed with DIPG, an aggressive brain cancer.

Within ten days of his diagnosis in October he became wheelchair-bound as the cancer attacked his brain stem, weakening his nervous system’s functions.

But his family said throughout his battle with the disease, he had only had to wishes; to be famous and to bring people together.

And that wish was granted. His fight against cancer inspired other sufferers up and down the country, while in his home town, the community came together to pray for the youngster and a cure.

Prayers for this family.