Young Man Turned Hero During Vegas Shooting Has Been Identified And America Is PROUD! [VIDEO]

For days now, following the mass shooting in Vegas, various news reports have made mention of military veterans in the crowds, making themselves human-shields for other concert goers and going around stopping the bleeding of those that had been wounded and left on the ground. Well, we now have the identity of that mystery soldier who was plugging up bullet wounds with his finger. It is a young US Army soldier.

This soldiers name is Matthew Cobos and we have photo evidence of his bravery and selflessness which was on display Sunday night. We see him in the photo lying over a young woman to serve as her personal shield from the hailstorm of bullets raining down around them.

The compelling picture went around the Internet turning viral and has made a huge impression on Americans wanting to know who this brave young man was.

The gunfire came from Stephen Paddock, who was shooting from his Mandalay Bay hotel room on the 32nd floor. This picture of Cobos protecting the young lady really puts the imagination into play and it’s anything but pleasant. 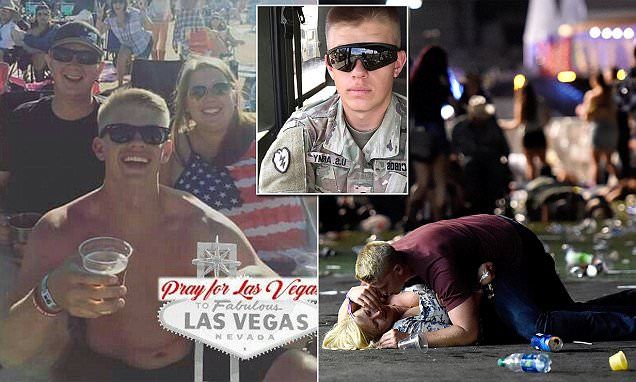 If you look at the details of the photo, you’ll notice that not only is Cobos protecting her from bullets, he is also protecting her form seeing the mass carnage that surrounds her. He is using his hand to cover her eyes to spare her the view and to keep her calm.

Moments later, Cobos and the woman got up and they ran to safety behind a nearby car.

David Becker is the photographer that took the photo and he later revealed that it was only seconds after the picture was taken, that they both hopped up and made a break for cover. He then noted that Cobos then returned to the line of fire to go after another person who had been injured, to get them to safety as well.

Cobos had used his belt as a tourniquet to help stop the bleeding of those that were injured. When one person was using his belt to just stay alive, he used his fingers to plug up the holes in people to keep them from bleeding out. This man is amazing and an example to American men everywhere.

There were others that night as well who threw themselves onto others to protect them, who grabbed tarps and fencing to assist in carrying off the wounded and who used their own vehicles to rush the wounded to the hospital.

Politics seems so irrelevant when put up against this caliber of Americans, just wanting to help people survive the most horrible event in many of their lives.