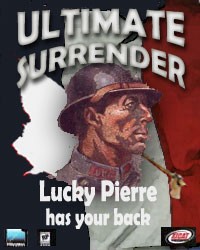 Paris – Inspired by the commercial success of the United States Army’s “Boot Camp” video game, the General Staff of the French Army has announced plans to market “Ultimate Surrender,” a video game based upon the proud military traditions of the Gauls.

In the game we follow the exploits of Lucky Pierre, an apprentice garlic salesman from Marseilles, as he joins the French Army and begins a rigorous course of combat training. The First Level of the game is called “Survival School,” and the players have to help Lucky Pierre survive 24 hours without red wine or cr’me brul’. The Second Level is “Capitulation,” and the goal here is to see which player can have Lucky Pierre surrender the fastest without firing a shot or getting his uniform dirty. Level Three is “Collaboration.” Here the players battle to see who can collect the largest numbers of pairs of nylon stockings and packages of chocolates by having Lucky Pierre perform sexual favors for members of the occupying forces. Level Four is “Be Ungrateful to America for Rescuing Your Sorry French Ass Once Again.” In this extremely challenging part of the game contestants vie with one another to see who can make Lucky Pierre behave in the surliest manner when the United States inevitably comes to the rescue of the defeated French. The Final Level is “Pretending to Have Been in the Resistance.” Here contestants compete in a battle of tall tales and whoppers as they try to protect Lucky Pierre from treason charges. 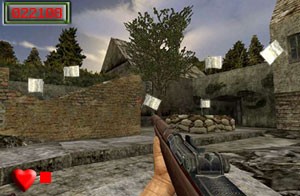 Marketing tests show that “Ultimate Surrender” is a big hit with French teenagers and young adults who are too young to have experienced France’s lightening surrender to the Germans in 1940 or its defeat by the Vietnamese in 1954 at Dien Bien Phu. “Zees is a great tool to inspire ze patriotism in ze youths, n’est ce pas?” said General Jean-Jacques Loseur, Commander-in-Chief of the French Army, during his weekly press conference. “Since ze end of ze Cold War we French have not had many opportunities to surrender or to show great cowardice in the face of much weaker opponents.”

When questioned about comments made in the French Chamber of Deputies that “Ultimate Surrender” makes the French Army look like a bunch of gutless mama’s boys, General Loseur pulled out a white handkerchief, put his hands over his head and said, “Oh heck, I give up.”

If you like this article, check out more material from Broken Newz by clickingBroken Newz[1].