This, right here, is hysterical.[1] It’s freaking perfect! The Jeep carrying the remains of Fidel Castro actually broke down during the funeral procession. Soldiers had to push the damn thing. Oh, the irony… that’s symbolic of the whole country since Fidel Castro took over. Once prosperous, it is a broken down heap of junk frozen in time by dictators. God must have been smiling down and felt the urge to kick Fidel one last time on his way to Hell. Who says God doesn’t have a sense of humor?

The crowds cheered when they were told to, like good little minions. They chanted, “Long Live Fidel!” And what do you want to bet not a soul there meant it. More like, “I’m glad you’re dead!” Yes, that was a gratuitous Batman reference, but it fits. And the Jeep was Russian. Bwa ha ha ha ha ha!! Keystone commies, I love it. Heh. 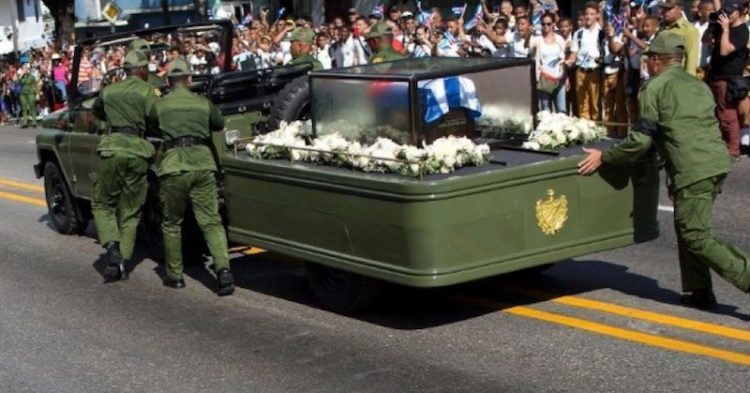 In one final dose of Karma, the jeep pulling Fidel Castro’s ashes through the final funeral procession broke down and needed to be pushed by soldiers.

The breakdown came in the midst of throngs of “adoring fans” chanting “Long Live Fidel!” in state-mandated displays of emotion. 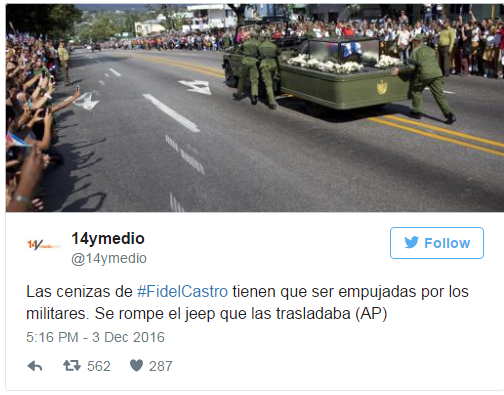 The breakdown of the Russian-made jeep was ironically symbolic of the barbaric decades of Castro’s rule on the island nation.

They lined up by the thousands[5], acting somber if told to or raucous if needed, Cubans pretended to be saddened by the death of one the Western Hemisphere’s most brutal dictators.

With the exception of the faux-praise from Cubans, only leftist world leaders like Barack Obama, Jimmy Carter, Vladimir Putin and groups like Black Lives Matter praised the hellbound dead man.

This is a man that lived like a billionaire while his people struggled in abject poverty. He had thousands killed and tortured. Castro had reeducation camps built and sanctioned the practice of post-birth abortions. He was a monster. The world is so much better without the likes of Fidel Castro. He was a murderous butcher and a dictatorial thug.

The only thing that would have made this more perfect would have been Obama riding in that Jeep. Now, that would have been even more epic. The Cuban military fired a 21-gun salute for the despot. Then Cubans at the entrance of the cemetery sang their national anthem. Castro’s ashes arrived about 40 minutes later. The somber ceremony lasted more than an hour. For some reason at the last minute, Cuban officials decided to make the ceremony private. It was not broadcast live as originally planned. International media were also barred from the ceremony, Fox News reports.

Castro is now in Hell where he belongs. I’m sure he has a special spot there after what he has done to so many people. But at least we got one more chuckle out of his death. Gotta love Russian transportation.