A man driving a horse and carriage[1] in the UK went through a McDonald’s drive-thru. They refused to serve him because they said it was too dangerous. A huge ruckus ensued as the man became very angry when they refused to serve him. To be fair, the server asking if the horse knew how to wait in a queue was just stupid. The man was adamant about being served and it made quite a scene. 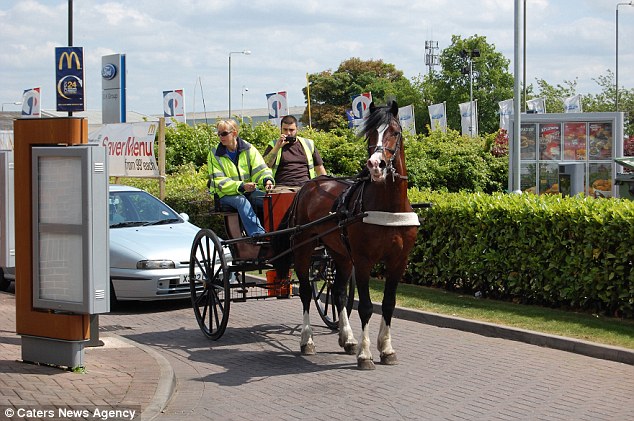 A huge row broke out at a fast food outlet in Bury after a man appeared at the window with a horse and cart.

He was furious when a staff member told him he could not be served, saying it was ‘dangerous’.

And she continued: ‘How does a horse know how to wait in a queue?’

But the carriage driver wasn’t to be moved, saying he was not going anywhere until he was served.

He is heard shouting: ‘A horse is like a car to me, so why are you not serving me?’

Now the man is claiming she is racist for not serving him. I don’t think that word means what he thinks it means. His money though is just as good as anyone else’s. They should have just served him. You have to be licensed in the UK to drive a horse and carriage just like a car. ‘My horse has more right to be here than any of these cars,’ he said, before demanding McDonald’s staff show him the rule book banning horse and carts. He accused the outlet of being discriminatory against gypsies (now I get the racist charge) and an unidentified woman can be heard agreeing. It happened at an outlet in Bury. In the time that it took for this stupid argument to play out, he could have paid, gotten his food and been on his way. Instead, the server made an unnecessary scene. Unless of course, it was indeed all about the gypsy and not the horse. McDonald’s defended the server, saying they only serve people in cars in the drive-thru. Looks staged and like a set up to me. McDonald’s was wrong for not serving the guy and the guy looks like an ambushing professional victim.