VIDEO: SNL Mocks Al Sharpton to His Face – Does He Even Notice?

Sigh… talk about clueless.[1] Al Sharpton doesn’t even get it when he’s being mocked. He never even noticed when he was on SNL that they were making fun of him. Instead, he was vain about his weight and was aggressively pushing his ‘black approval scale’. Predictably, Hillary did the best of the candidates, followed closely by her commie bud Bernie Sanders. Ted Cruz scored very low, just because Sharpton didn’t like the way he looked. I’ll take Cruz over that rat a million times over. As for Trump, he gave him a negative 1,048 rating. I’m not a fan of Trump, but he has a lot of followers in both the black and Hispanic communities. The scale was a partisan joke, just like Sharpton is. 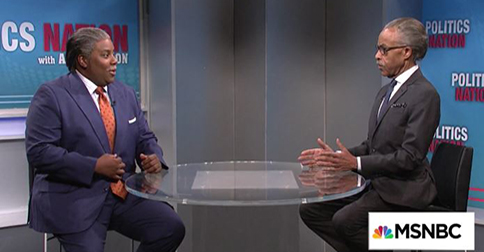 Al Sharpton had a front row seat as he was mocked on Saturday Night Live.

Kenan Thompson did his typical impression of Sharpton bumbling words and talking loud about Voter I.D. Laws during the skit on Saturday.

“Is the real purpose to disen-french fries people,” Thompson asked, to start the segment.

“Despite Bernie Sanders win this week in Wisconsin it’s no secret that Hillary Clinton is raisinets, excuse me, resonating more with black voters,” he said as he introduced the real Sharpton as character “Charles Richards.”

Sharpton talked about his Black Approval Scale Rating and discussed how beloved the Democrats are in the black community while taking shots at the Republican candidates.

But the fake Sharpton (Thompson) kept bumbling his words throughout as he said things like “phantomnomenal.”

“What’s going on with you today, Al? You’re usually a very smart person,” the real Sharpton said to Thompson to end the skit.

Sharpton has never lived up to his name. He’s a racist moron. Points to SNL for roundly mocking the money-grubbing, corrupt rat. I noticed he was very careful not to mispronounce anything this time out. Too late… we have instance after instance of him butchering the English language. He didn’t even laugh during the skit. It’s like he was just there to make political points. By the way, saying that black people are for Bill Clinton is not a reason to elect the Hildabeast. Lame. I actually think he was offended at the end. Good and that was funny.