Between the Democrats in the Senate who understand that amnesty means a permanent majority for their side and Marco Rubio choosing to sell his soul to help the Left put a path to citizenship in place, the Gang of 8’s immigration bill always looked like a good bet to pass the Senate. In fact, the talk was that the pro-amnesty side wanted to get 70 votes to put pressure on the House Republicans to vote for the bill. Conceivably, given that Republicans have proven that they deserve the stupid party moniker again and again, that could still happen. 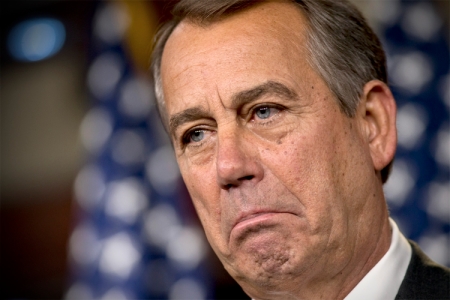 However, getting a bill through the House has always been much trickier. Not only are the House Republicans much more conservative than their colleagues in the Senate, they have to face the voters every two years. Shameless liars like Marco Rubio and Kelly Ayotte may be able to flip on amnesty now and hope the voters forget by the time they’re up for reelection, but House Republicans don’t have that option.

That means that an amnesty bill only has two possible paths through the House.

The first would be for John Boehner to ignore the Hastert Rule, which is that a majority of his caucus has to support a bill before it goes to the floor. So, if Boehner brought an amnesty bill to the floor and all the Democrats voted for it along with a handful of Republicans, it could pass.

Option two would be for the House to pass an enforcement bill with no amnesty in it and send it to conference. Boehner could then stack the conference committee with pro-amnesty Republicans, who’d add amnesty to the bill and then the leadership would bring that up for a vote.

Because of a revolt by 70 Republican members of the House, a big enough group to keep John Boehner from being reelected as Speaker, neither of those options looks likely anymore[2].

Seventy House Republicans are planning a politically risky showdown with Speaker John Boehner (R-Ohio) to try to force additional debate on an immigration bill they say will mean amnesty for illegal immigrants and have dire consequences for the country.

The 70 members are petitioning for a special Republican conference meeting on the bill, a “highly unusual” move to go head-to-head with the speaker, according to Reps. Michele Bachmann (Minn.), Steve King (Iowa) and Louie Gohmert (Texas), who are serving as spokespersons for the group.

Bachmann, King and Gohmert told TheBlaze the group is invoking the Hastert Rule: requiring support from a majority of the majority to bring a bill forward.

The petition is expected to go to the House leadership on Friday, but it’s possible some signatories might remove their names due to political risk, or that Boehner could head off the challenge by striking a deal. Going against leadership in such a way could have harsh political consequences for the signatories, including retaliation such as permanently getting passed over for chairmanship positions.

John Boehner has now responded to this threat by publicly agreeing to the group’s demands[3].

…Boehner’s comments were in specific response to a question about the Hastert rule – a procedure that, if followed, prevents bills from being brought to the floor unless they have a majority of support from the majority party. The group of Republicans fighting immigration legislation want the rule honored in order to more fully discuss and vet the measures.

In all fairness to Boehner, it’s entirely possible that he never intended to do anything other than that. The problem is that the Republican leadership simply isn’t trustworthy in the first place. The very fact that the Republican Party is not only willing to consider an amnesty bill, but is supporting a bill in the Senate that is even more offensive that the one that inspired a conservative revolt during Bush’s second term is mind boggling.

The good news is that no matter what passes the Senate, the odds are now heavily against any kind of amnesty bill making it through the House.