How many Americans will be victims of senseless violence committed by illegal aliens before the government wakes up? One mother shared her heartbreaking story in the hopes of drawing attention to the injustice that is illegal immigration and sanctuary cities. 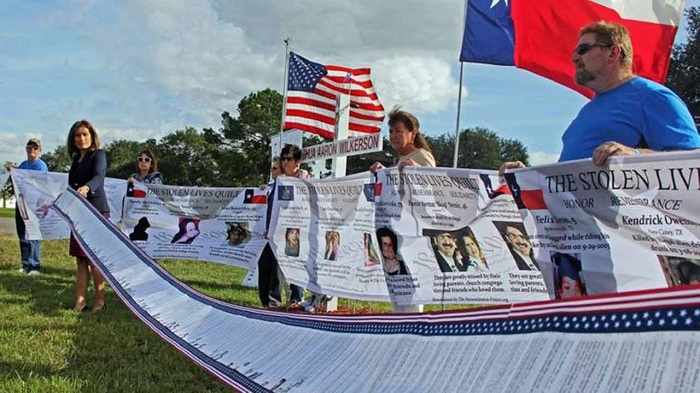 “My name is Laura Wilkerson,” she said. “My husband George and I live just outside Houston, Texas. We’ve been married 25 years and we’ve raised three children. Our youngest son, Joshua, was brutally murdered on Nov. 16, 2010, by a kid who was a classmate of him. We found out later he was from Belize, brought here illegally by his parents when he was about 10 years old. I’m just going to tell you the story. It’s sad story. If I cry, don’t let it bug you. It’s part of my daily routine at this point. I hope that it makes you mad, because I think Josh deserved to live if only because he was an American citizen.”

After Mrs. Wilkerson warned the audience of the likely coming outpouring of emotion, she trudged forward with the details about what happened to her son. “It was a typical Tuesday,” she said. “Joshua was in his senior year of high school and he was 18 years old. It was November and he would have graduated in May. He came in in the morning when I was getting ready for work and said ‘bye, Mom. I’m leaving to go to school.’ I said, ‘okay, I love you Josh. I’ll be home early today. I’ll be home around 1 o’clock.’ He said ‘I love you too, Mom.’ I said, ‘see ya.’ I stood there at the glass door and watched him get in his truck and he got to the end of the street and turn. I shut the door and went on and proceeded to get ready for work, never knowing it would be the last time I see him.”

Around 1:30 p.m., after she had not heard from Josh, she said “mother’s instinct” or perhaps God, made her think something was not right. “Josh was the kind of kid that he’d never been in trouble over a traffic ticket,” she said. “He always let me know where he was. I texted him and said ‘just let me know you’re okay.’”

After Josh did not respond to that text message, Mrs. Wilkerson said she “became frantic.”

“I just started to drive around and look,” she said, fighting off tears by this point in her speech. “I drove by a couple of his friends’ houses that I thought maybe he would go to and by the gym that he went to. Nothing. I looked around for about an hour or two and by the police station, no wrecks, no one in the hospital. Then I happened to look to the left and I saw his truck parked in a parking lot, a strip center by a dumpster. I stopped at it and looked at it. I could tell something was wrong; it had been driven through a field. There were seeds and grass, which was out of the ordinary. So, I called my husband to come. He came, and we called the police. They came, and in just a few minutes they asked me over and they slid open the dumpster next to the truck.”

Through sobs, Mrs. Wilkerson said the police then said to her: “Mom, are these his things?”

“Yeah,” she responded, as police pulled Josh’s shoes, backpack and other belongings out of the dumpster his truck was parked next to.

“I knew then he was dead, not coming home,” Mrs. Wilkerson said. “I just didn’t know how or why. None of it made sense to me. At any rate, we were finally told to go home from that parking lot at 11 at night. So we went home, just shocked and stunned, not knowing anything.”

Around 3 a.m., she said, police came back to see her and her husband at their home and informed them they had a suspect in custody. Police told them to be back at that parking lot at 6 a.m. because Texas Equusearch, a mounted search, recovery and rescue team in the state, was going to look for Josh. “We think he’s hurt and we think he needs help,” she said the police told her. “And we need to find him.”

“Now, when you hear the words, none of it makes sense,” she said. “It doesn’t make sense. The word ‘suspect’? You hear that every day, I thought. Nothing makes sense to me. At any rate we went to the parking lot the next day and Texas Equusearch looked for Josh with ATVs, boats, sonar, horses. They walked a grid. The community just poured out for Josh. It was incredible. It was just unbelievable. We stayed in that parking lot until dark and then we went home.”

About 20 minutes later, police visited their home again. “The detectives, they came in and I just looked at them,” Mrs. Wilkerson said. “I said, ‘you found him.’ They said ‘yes.’ I said, ‘what did he look like?’ He said ‘I didn’t see him.’ I should have known that he did, but he didn’t want to tell me about it.”

Wilkerson said she will always remember the look on the detective’s face when he told her the suspect in custody, Hermilio Moralez, was not in America legally.

“I’ll never forget looking in that detective’s eyes as he was telling me, ‘yeah this kid is in the country illegally,’” Mrs. Wilkerson told the crowd in Richmond. “I said ‘where are his parents?’ He said, ‘we can’t ask him.’ He couldn’t ask them because it was a sanctuary city at that time. I thought, ‘really? You could pull me over and ask me any question under the sun, legally, but you can’t ask that?’ It just made no sense to me. It stuck in my head forever.”

There is no reason that an illegal alien should be exempt from laws that actual American citizens have to obey, nor should they be able to avoid deportation if they’re caught — and especially not when they’ve been caught after committing another crime. It’s downright despicable that so many of our politicians put these criminals before the lives and safety of American citizens like Josh Wilkerson.