Before I get into this[1], I just want to state for the record that Jorge Ramos is a bigoted, racist, Marxist putz. I feel much better now. Tucker Carlson shares my sentiments it would seem. However, he’s much better at verbal evisceration than I am. And it is deeply satisfying to watch. Ramos of course said a wall would be worthless. Not so in Israel, so I’m pretty sure it would work here as well. In fact, Mexico herself has a wall on her other border with Central America. The wall would indeed stop illegal immigration. Along with ICE agents, border patrol (armed of course), razor wire, drones, computerized surveillance and checkpoints. I guarantee you it would work.

As far as not being at war with Mexico, not so fast. I contend we are at war with the cartels and therefore with Mexico. Mexico is now the second most violent and deadly nation on earth. They are only outdone by Syria currently. That’s quite an accomplishment. With drugs and human cargo being smuggled over that border, you ask any DEA guy or border patrol officer whether we are at war or not. I’m sure the answer would be enlightening, not that Ramos would bother to hear it. 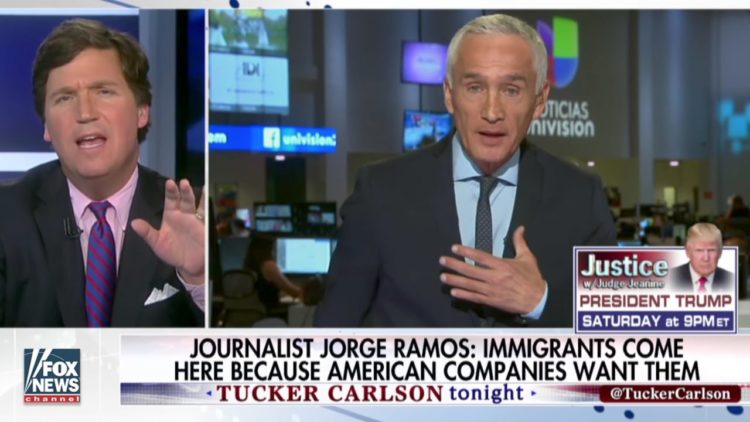 Carlson began the segment by noting that Ramos believes the border wall proposed by President Donald Trump is both “illegitimate” and “bigoted.”

“The wall is useless,” Ramos affirmed. “That wall is not going to do anything to stop immigration.”

Carlson pointed out, citing Ramos’ statistics, that the majority of immigrants who come to America don’t come via visa or airplane, but come across the border. “If you can get a handle on that” then Carlson suggested that illegal immigration could be quelled with a wall.

“Maybe your real fear is that it would be too effective,” Carlson said. “Walls work in other countries like Israel.”

Ramos argued back that what “we’re doing at the border is somehow working,” noting that some of the safest U.S. communities are on the southern border and that illegal immigration rates have remained steady over the last half decade.

“The last time I check, we’re not at war with Mexico.”

Then Tucker Carlson moved in for the kill: “Do you adopt this attitude at home?” he asked. “Do you have locks on your doors at home?” “Of course, yeah,” Ramos replied. “Are you at war with your neighbors?” Carlson followed up. “I’m very civil with my neighbors,” Ramos said. “Then why do you have locks on your doors?” Carlson said. A very good and astute question. Because he wants to keep the bad guys out just as America does. It doesn’t take a genius to figure that out. Carlson wanted to know why Ramos locked his doors at night… he deflected and accused Tucker of calling all immigrants criminals. He did no such thing and Ramos knows it.

Just as Ronald Reagan said: “A nation that cannot control its borders is not a nation.” America must regain control of her borders to operate as a sovereign nation and keep Americans safe. “Your attitude [about your house] is the one we should have about our country: if you care about something, you want to secure it,” Carlson explained. “That doesn’t mean you prevent anyone from entering, I’m sure you have guests in your home, but you decide who they are and you don’t want someone coming in your house that you didn’t invite. Why is a country any different than that,” Carlson asked. And he’s exactly right. America has the sovereign right to determine who they let in… Mexico does not have the right to tell us who to let in.