A bunch of Democrats sent a letter to President Obama, demanding he stop deporting illegal aliens.[1]

Well, they didn’t exactly call them illegal aliens, because that’s racist, or something.

I think they said they were… 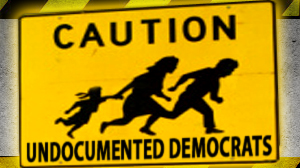 While immigration reform is stalled in Congress, some members are calling on President Barack Obama to take the matter into his own hands, urging him to suspend deportations of undocumented immigrants.

Thirty Democratic members of Congress wrote in a letter that he has the authority to pause deportations of undocumented immigrants, urging “the sensible and moral step of stopping deportations.” […]

“Mr. President, you do have the power to stop what’s going on,” Rep. Charlie Rangel, D-New York, said at a news conference on Thursday.

In their letter, the members point to executive action in 201,2 when Obama exercised his discretion to suspend deportations of children of undocumented immigrants, known as Deferred Action of Childhood Arrivals.

“Please, Mr. President, do something,” said Rep. Luis Gutierrez, D-Illinois. “We need you to take the kinds of positive action to help our families.”

Rangel recently came out in favor of the President taking action by Executive Order on pretty much everything. It easy to assume he wants it done here.