The Economy Would Be Doomed Without Immigrants Or Something 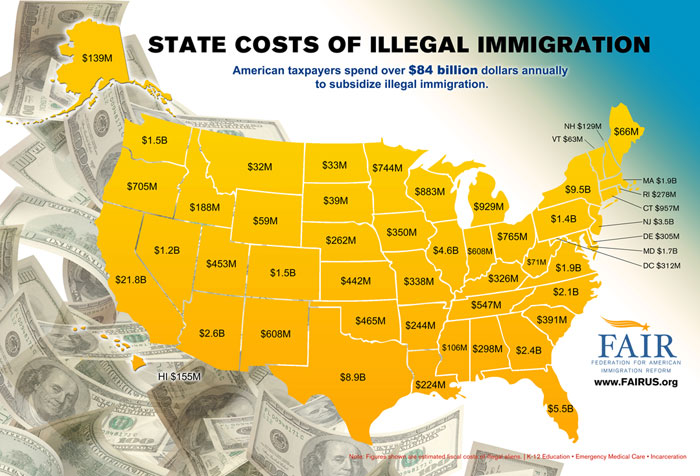 This is yet another reason why Trump won: the media’s dishonesty when it comes to the debate on illegal aliens, in which they conflate all immigrants, legal and unlawfully present, together

Without immigrants, the US economy would be a ‘disaster,’ experts say[2]

Immigrants across the U.S. are refusing to go to work, attend school and shop today as part of the Day Without Immigrants, a series of protests intended to illustrate the significant economic and social impact that immigrants have on the country.

The protests, which were organized on social media, are demonstrations against President Donald Trump, who has been criticized by some as anti-immigrant and xenophobic for his promises to deport unauthorized immigrants, build a wall along the U.S.-Mexico border and conduct “extreme vetting” of immigrants from seven predominately Muslim countries.

“Criticized by some”. It’s great how they work that in to the article in the 2nd paragraph.

While the economic impact of today’s actions remains unclear, several economic experts told ABC News that the U.S. economy and workforce would be a “disaster” without immigrants.

“If all immigrants were just to disappear from the U.S. workforce tomorrow, that would have a tremendous negative impact on the economy,” said Daniel Costa, the director of immigration law and policy research at the Economic Policy Institute, an economic research think tank based in Washington, D.C.

“Immigrants are overrepresented in a lot of occupations in both low- and high-skilled jobs,” he explained. “You’d feel an impact and loss in many, many different occupations and industries, from construction and landscape to finance and IT.”

And that’s how they conflate illegal and legal. And we aren’t discussing deporting those who are lawfully present. Just the illegals. We don’t see anything about illegals till near the end

According to Meg Wiehe, the director of programs for the Institute on Taxation and Economic Policy, “Undocumented immigrants contributed more than $11.6 billion in state and local taxes each year. And if the estimated 11 million undocumented immigrants here were given a pathway to citizenship or legal residential status, those tax contributions could rise by nearly $2 billion.”

OK, there’s an easy fix for them: they leave the country and apply for citizenship, or apply for a work visa, just like so many others who do it right. It’s not that hard.

Of course, what’s also missing is the cost[3] to the states, municipalities, and country from illegals.

But, one has to wonder, what do immigrants who have committed felonies contribute economically? Because the vast majority who were caught up in the recent sweep are felons, and those sweeps are why the news media are trotting out stories like the above. Is ABC News propositioning that child molesters should be given citizenship or legal status? Is this their argument? Are these the people they’re supporting?