First off[1], what parent in their right mind would allow their child to go on a high-schoolers only pleasure cruise? That’s asking for it. But the nightmare came home in Sweden when four 19 year-old Muslim migrants raped one of those high school girls last month. Sweden is just plain suicidal. They have let so many Muslims in now that rape gangs freely roam the streets and it would appear, anywhere else they feel compelled to go. Any bets on whether these four will get off with a slap on the wrist? Sweden is no longer safe to visit much less allow your children or women to roam freely in. The Caliphate has all but conquered the country and people are surprised things like this are happening. 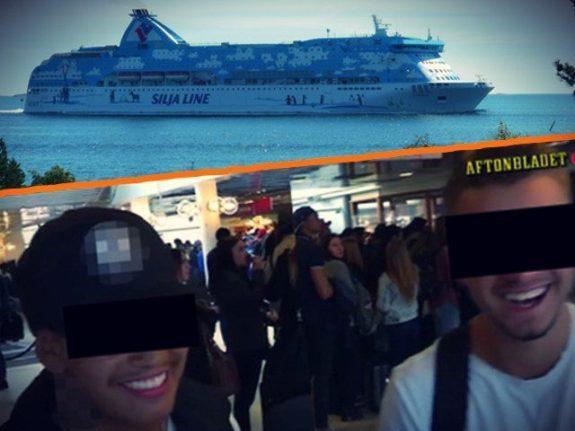 Four men are facing trial this month accused of raping a woman on a student ferry trip between Stockholm and Finland, one in a series of alleged incidents on the so-called Baltic booze cruises.

The woman told police she was raped on a party cruise which saw around 1,700 students from Sweden travelling across the Baltic sea at the end of March.

Eight people have in total featured in the investigation, but four have since been released.

On Thursday four 19-year-old men were charged. According to the prosecutor no one else is believed to have been involved in the alleged aggravated rape.

“The suspicions against the others are completely dropped,” Angelic Runesson told the Dagens Nyheter newspaper.

We are only learning these are migrants because Sweden’s largest newspaper made a boo boo. I’m actually surprised there weren’t more incidents on the cruise. There were 1,700 students on board the cruise ship. Originally, there were five men detained, including two believed to be accessories to murder. They gang raped that girl – her identity has not been released. The non-Western young men told the camera of their plan to have a good time while at sea, remarking they wanted to “Just f**k about”. He remarked “because we are students”, they wanted to “actually go f**king wild”, reports Sweden’s Aftonbladet. The footage was released by the paper accidentally to their website and was later taken down, but a screenshot was preserved of the men, censored by Friatider to comply with Swedish law. The attack took place in one of the cabins. According to court documents seen by Breitbart London, the three latest arrests are all of migrant origin youths. Now held by police are 18 year-old Somalian ‘Mohammed’, a 19 year-old born in Sweden to a Somalian father named ‘Jamaal’, and 19 year-old ‘Zoran’, a born Serbian with Bosnian citizenship. All three live in the Swedish city of Vasteras. So do the other arrested men. Two of the men are charged with aggravated rape while the third is accused of complicity in rape, suggesting he may have watched the act, reports Sweden’s FriaTider. In total, eight were arrested. Four were released. It’s yet one more incident in the sex Jihad going down in Sweden and Europe as a whole.