Even better, California citizens are not welcome at these government funded facilities. 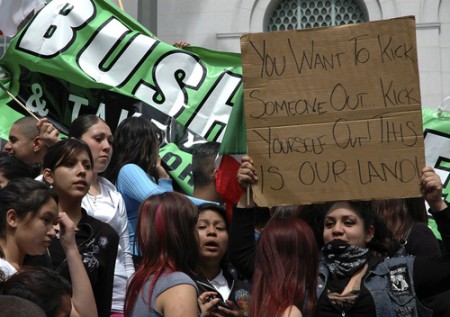 The bill was signed along with a number of others laws seen as favorable to undocumented immigrants.

As part of the driver’s license application process, immigrants will have to acknowledge that they are undocumented. But AB 60 protects applicants from criminal prosecution.

“This is the stepping-stone to state level amnesty,” Jon Feere, legal policy analyst at the Center of Immigration Studies, told The DCNF.

“California is the state that gave us Ronald Reagan. Now it gives us illegal alien lawyers with law licenses and illegal alien drivers with driver’s licenses,” Feere said.

There will be 5 facilities which could provide DL’s (I wonder if they will be free?) to people in our country illegally. Next up will surely be official Social Security numbers, a pure legal status, government benefits, and voting rights.

Meanwhile, VP Joey Biden was let off his leash

(CNS News[3]) Vice President Joe Biden, in a speech to the U.S. Hispanic Chamber of Commerce’s 2014 Legislative Summit, on Thursday said the 11 million illegal aliens in the United States “are already Americans.”

“Eleven million people living in the shadows I believed are already American citizens,” Biden said. “These people are just waiting, waiting for a chance to be able to contribute fully, and by that standard, 11 million undocumented aliens are already Americans in my view.”

Doofus. Nancy Pelosi[4] has stated that amnesty is more important than winning the House (a veiled acknowledgement that Dems have no shot at winning it back this year). I suspect they are testing out the notion of making “immigration reform” a major platform for the mid-terms. Sheesh, it’s not like 95% of murder warrants[5] in Los Angeles aren’t for illegal aliens. 75% of people on most wanted list in LA are illegals. 35% of people in California jails are illegals. The FBI says roughly half the gang members in LA are illegals. Cost LA County $36 million a month in welfare costs.