GOP Immigration Plan Will Legalize Up To 2.5 Million Illegals 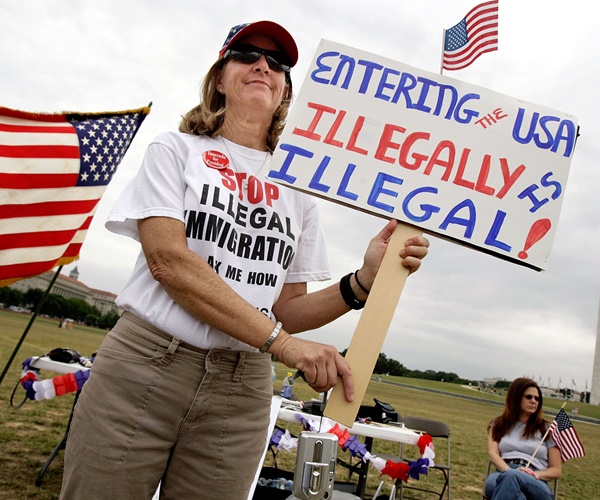 If it doesn’t include the notion that the people who “sinned”, as in the talking point from pro-illegal alien folks “we shouldn’t punish the children for the sins of their parents”, should be deported for intentionally breaking our laws and violating our sovereignty, then it’s a non-starter. We should not reward criminal behavior

Sen. Thom Tillis will introduce his “conservative Dream Act” on Monday that would provide a pathway to citizenship for as many as 2.5 million young undocumented immigrants, but one that is long and involves “extreme vetting.”

The North Carolina Republican and cosponsor James Lankford, an Oklahoma Republican, will pitch the plan as “merit-based” relief that must be earned — and, critically, not “amnesty,” according to Republican talking points obtained by McClatchy. But unlike other merit-based immigration proposals that limit new immigrants from entering the country based on their job skills, this proposal would limit who can remain in the country based on their years of American education, work experience or military service.

“Choosing between either mass deportation of Dreamers or blanket amnesty is a false choice,” the lawmakers argue, according to the talking points. “There is a third option: an organized process by which talented and hard-working young Americans can earn legal status.”

Well, obviously, pro-illegal folks will be upset with this, but, then, they’d be upset with any legislation that doesn’t simply offer blanket amnesty for all illegals.

All applicants will have to pass a medical examination and be “extreme vetted.” The vetting will include three separate rounds of security and background checks to ensure they have no criminal history and pose no national security threat. The first check would happen when the immigrant enters the program followed by a second check after five years. The third check comes after 15 years, if and when the immigrant applies to become a citizen.

That time frame will drive the pro-illegals nuts, but, it makes sense that if illegals want citizenship, they have to earn it. And it very much expands the disqualifying crimes from previous bills. But, it doesn’t mean citizenship for all

The proposal would grant high school graduates without a serious criminal record conditional immigration status for a five-year period. During that time, if they earn a higher-education degree, serve in the military or stay employed, they could apply for permanent residency and, eventually, citizenship.

They have to earn it, and it would only apply to those who entered prior to January 1, 2012, and were younger than 16.

This all begs the question: what measures are included to disincentive illegals from coming in the future? I guess we’ll have to see the bill to know.