ICE has just arrested a bunch of Iraqi Christians[1] for deportation. At first, I was shocked and outraged and then I read further. These Christians are ones that have broken the law. Per ICE’s mandate, if you are here illegally and break the law, you are going to be deported. Normally, I would champion Christians, as they are persecuted in the Middle East and sending them back can get them killed. But, these are individuals who are guilty of a variety of offenses ranging from non-violent, to rape and murder. The law is the law… if you committed a crime, you will be deported.

These are Iraqis in Detroit, Michigan and other places. I also know that some Muslims pretend to be Christians to gain entrance to the U.S. and avoid deportation. I choose to put my faith in ICE here. I am not without sympathy for these people… they will go back to a place where they could well be killed if they are Christians. ICE on Monday declined to say how many were taken into custody, but some advocates say at least 40 people were arrested near or at homes, mostly on Sunday, while other estimates are that more than 100 Christians were picked up. 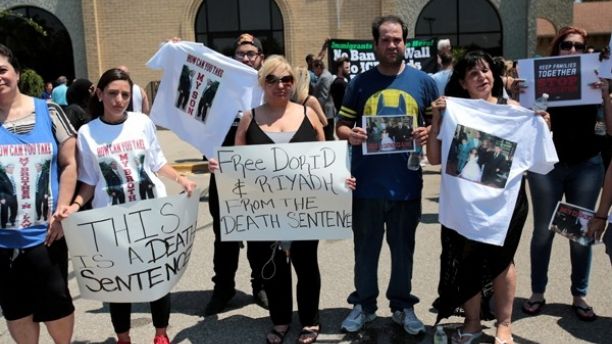 Members of the Iraqi Christian community in the U.S. are expressing feelings of betrayal by their adopted country after dozens of members were detained in a deportation sweep.

The U.S. Immigration and Customs Enforcement (ICE) conducted the mass arrests over the weekend with a majority of them occurring in the Detroit area. More arrests occurred earlier this week. Relatives of those detained say most of those detained were picked up for committing low-level and nonviolent offenses, and some had already served prison sentences for those offenses.

“Many of these people came here legally and maybe they fell into some trouble at one point in their lives,” Nathan Kalasho, an Iraqi-American Christian activist in Michigan who has been helping with legal assistance for the families of the detained, told Fox News. “They have paid their debt to society. These are good people who live good lives, but they are being put at risk by being deported.”

I do question some of the methodology in the arrests here. Other Christians were arrested at their churches, including one man in suburban Michigan who was nabbed by ICE agents as he arrived at church for his daughter’s first communion service. The Detroit area has one of the largest communities of Iraqi Christians, known as Chaldeans, in the U.S. with an estimated 120,000 in and around the city.

The sweep follows a recent agreement by Iraq’s government to allow the return of immigrants who have been ordered out of the United States. Details of this agreement first surfaced during litigation over the initial version of President Trump’s travel ban. ICE said in a statement released Monday that all of those arrested had criminal convictions, including some for murder, rape, assault, burglary, weapons violations and drug trafficking, and were ordered deported by an immigration judge after “full and fair” proceedings. Religion has nothing to do with this move… the rule of law does.