When you think of a model posing for a photo shoot on Miami Beach, what comes to mind is probably not a crowd of illegal immigrants jumping off a boat and rushing towards the shore. But that’s exactly what happened earlier this month. 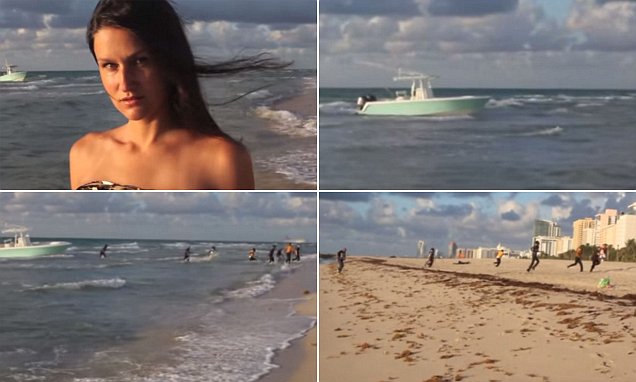 A group of undocumented immigrants interrupted a model’s video shoot in Miami Beach this month as they ran from a boat to shore in the back ground of where the woman was filming.

Ekaterina Juskowski was filming her unnamed friend stroll down the beach in a sequined dress at about 6am on July 10 when she noticed a boat approaching the shore.

At first, she thought it was scuba divers so she stopped the video, but she soon realized it was about nine migrants running toward the sand.

When she saw the men pour out of the boat, leaving it behind in the water, she turned her camera back on.

‘That’s a testament to how confident these organizations are – what we call transnational criminal organizations – who smuggle criminals and narcotics right onto the beach,’ U.S. Border Patrol spokesperson Frank Miller told the New Times Broward-Palm Beach.

‘There has been an increase in known maritime smuggling in Florida – from Key West all along the Florida coast – from fiscal year 2014 to now,’ he said.

Why shouldn’t these people be brazen? Look at who our president is; it’s not like they have to worry about being deported or anything.