Mexican Illegal Alien Molests 10-Year Old Girl in CHURCH, But Says It’s Not His Fault Because…

The crime wave caused by Obama’s insistence on allowing illegal immigrants to flood our borders apparently will continue on unabated, and the victims will be our own children. The latest example comes out of Tempe, Arizona, where an illegal immigrant molested a ten-year-old girl in church, and then blamed her for it. 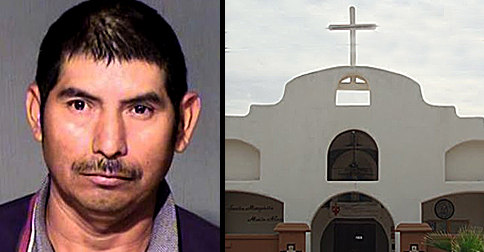 A Mexican illegal alien has been accused of molesting a 10-year-old girl in church in Tempe, Arizona.

And then he added insult to injury — by actually blaming her for it, saying she “flirted” with him.

This is the kind of scum Obama is importing into this country:

Hilario Ortiz Baltazar, 45, was booked into jail under suspicion of aggravated assault and molestation of a child on June 7, 2015.

According to court paperwork, the man allegedly grabbed the girl’s hand and put it on his crotch then kissed her, caressed her back and rubbed her butt May 31.

Or as Jeb Bush might call it, an “act of love.”

He did all this while attending service at St. Margaret’s Church near Loop 101 and Apache Boulevard.

The girl was with two of her cousins at the time of the incident and tried to grab one of the cousins’ hands, too, the police report states.

He was busted when he returned to the church the next week to try it again.

When Baltazar was arrested on June 7, he told police that the girl — the 10-year old — was being “flirtatious” with him, but upon coaxing, admitted what he did was wrong. He claimed he was “lonely”.

So a 10-year old came on to a 42 year old man? And he was lonely. Repulsive beyond belief.

Incredibly, once he was done with his confession, Baltazar actually asked the officer if he could go back to Mexico once the interview was finished — showing how lightly he really takes these actions.

That should come as no surprise. A horrific proportion of child rapes are committed by illegal aliens, not surprising given that most states in Mexico have a disgraceful sexual age of consent of 12. And now not even church is too sacred to keep these pedophiles at bay.

It’s the typical sex offender excuse: she was asking for it, she really wanted it, she said no but meant yes. His excuse may not be surprising, but it doesn’t make it any less disgusting — and on top of that, he’s a criminal who shouldn’t have ever been here to begin with. How many of these crimes will it take for these open borders lunatics to wake up?