It’s official: the illegal immigration crisis we’re seeing right now is nothing less than an invasion of the United States, made possible by the Mexican and Guatemalan governments — and of course, our own Dear Leader, who is sitting blithely by, letting it all happen. The presidents of Mexico and Guatemala, Enrique Pena Nieto and Otto Perez Molina, just held a press conference announcing how exactly they were facilitating the illegal invasion into the United States by their countrymen. 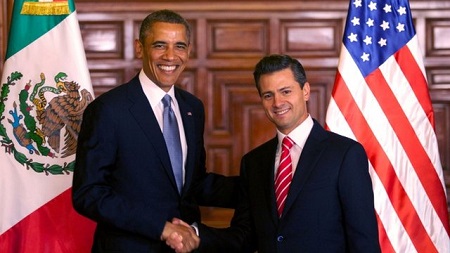 The Southern Border Program to Improve Passage, will provide for more border checkpoints along Mexico’s border with Guatemala, and offer more protection and even emergency medical care to those making their way north. The illegal aliens will receive a so-called Regional Visitor’s Card, according to El Universal.

Officially, the program will grant the cards to only illegal aliens from Guatemala and Belize, allowing them to remain in Mexico’s southern states for 72 hours (more than enough time to reach the U.S./Mexican border by train). While, those two countries share a border with Mexico, the program will undoubtedly benefit anyone who makes it to the border, which would explain why our Border Patrol stations are currently overflowing with illegal aliens from El Salvador and Honduras as well.

The program will also give special protection and even financial assistance to unaccompanied minors now pouring across our border. Of course, these efforts, chiefly by the Mexican government, will only increase the number of illegal aliens coming to this country by the thousands, now on a daily basis.

The official announcement only confirms what many of us have known all along…the current chaos on the border which the Obama administration has sympathetically (and dishonestly) characterized as a “humanitarian crisis,” only exists due to collusion between the governments of Mexico, Guatemala and likely the United States.

The Obama administration undoubtedly was involved in some way, but even if they weren’t, how much of a difference does that really make? Knowing that these foreign governments are basically conducting a state-sanctioned invasion of our country while our president not only does nothing to stop it is just as bad. But the truth is, Obama isn’t just standing by doing nothing — his administration is encouraging them to come and spending taxpayer dollars to get them here, so even if he isn’t implicitly involved in this particular scheme, he’s still an active, willing participant in the overall plan of getting as many illegal immigrants into the United States as possible.