Obama refuses to enforce our immigration laws, allowing countless criminals to flood our borders. But some citizens are refusing to sit back and just let it happen, so a man known as “Nailer” is leading a group of watchmen to stop illegal immigration. 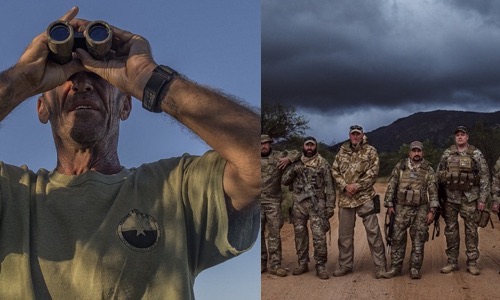 Along the border between the state of Arizona and the country of Mexico, a band of Americans outfitted in full military gear patrol for suspicious activity as part of their operations as “watchmen” for Arizona Border Recon — an unofficial group of veterans and security experts fighting against illegal immigration.

Led by a salty chief known as “Nailer,” the group patrols in and around dangerous border towns like Nogales, Arizona. They have three stated goals; stop illegal immigration, stop human trafficking and stop drug smuggling.

According to the U.K. Daily Mail, their private patrolling activity isn’t appreciated by the Obama flunkies running his Border Patrol agency. But on the ground, where the action takes place, it’s well known that Border Patrol agents appreciate the intel that groups like Arizona Border Recon provide them on a daily basis.

One look at the well-outfitted men should be enough to understand why illegal aliens on the Mexican border are more scared than ever to risk jumping the fence.

What these men are doing is truly commendable. But what’s sad is that they even have to do it.