I have to wonder how many other states will be in the same boat? New Jersey had to pass a law to give them in-state tuition. Many GOP controlled states will say “nope!”

(WRAL[1]) Students who arrived in the United States illegally cannot get in-state tuition in North Carolina community colleges or universities, even if they have been granted “deferred action” status by the federal government, according to a letter from the North Carolina Department of Justice released Thursday. 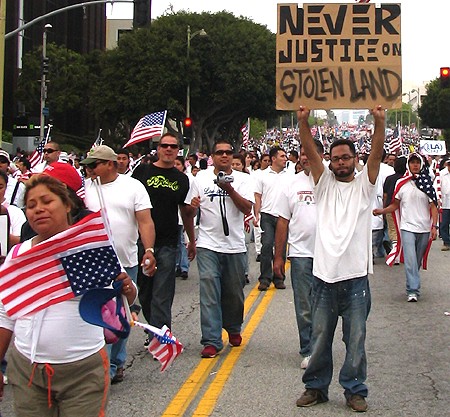 Last summer, the federal government announced that certain individuals who came to the United States illegally when they were small children would be able to work toward citizenship. To qualify for the Deferred Action for Childhood Arrivals program, or DACA, participants must be under the age of 31 as of June 15, 2012, and meet other qualifications[3].

Rep. Marcus Brandon, D-Guilford, wrote to Attorney General Roy Cooper asking if those students would qualify for in-state tuition benefits, particularly if they had graduated from North Carolina high schools. In-state tuition is thousands of dollars cheaper per year than tuition charged to students from other states.

North Carolina law would have to be changed in order for these children of illegals to receive in-state tuition — which will not happen, what with the GOP controlling both houses of the General Assembly. The only way there’s even a vote is if a Democrat brings it up.

The N.C. Dream Team, a group of undocumented young adults pushing for changes in state and federal policy, responded to the letter by lashing out at (NC AG Rory) Cooper, saying that he has “thrown immigrant students under the bus.”

Typical Leftists. The law means nothing to them. It meant nothing when they came here illegally; it means nothing to them while they are here illegally, soaking up services, committing crime, wasting legal taxpayer money, and they want what they want, regardless of The Law. They should simply be deported, even if it’s just to another state which tolerates these illegal aliens. Why should they get in-state tuition? They aren’t legal residents of North Carolina, much less the United States. Every spot they take in a North Carolina university system school is one less for a legal resident/citizen and in-state tuition has a cost to the citizens of North Carolina, who pay roughly 40% of the overall tuition.

Next time tell Mom and Dad to not break the law.

AWESOME!!! This should NEVER have been considered in the first place. Sorry their parents BROKE THE LAW and brought and kept them here, but it’s NOT my responsibility to supplement their education. Yes immigration needs reform but NOT this way. Glad they want an education but no one is denying them said education only denying RESIDENT IN STATE to those who are NOT RESIDENTS of the state. add LEGAL AND DOCUMENTED to that.

They shouldn’t be attending our schools in the first place. Let them go back to their home countries and apply to come legally.