While some states are throwing all kinds of free goodies to illegal immigrants, thereby rewarding their criminal behavior, at least one state isn’t. Nebraska enacted an ordinance that bans renting homes to illegals, and the Supreme Court isn’t going to fight it. 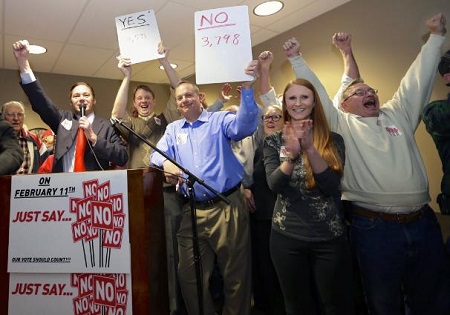 The U.S. Supreme Court’s decision not to review a Nebraska city’s ordinance that bans renting homes to immigrants living in the country illegally could open the door to similar laws elsewhere, supporters said Monday, though they’re likely to encounter fresh legal challenges.

Attorney Kris Kobach, who defended the ordinance, said Monday’s decision gives a “bright green light” for other cities within the 8th Circuit U.S. Court of Appeals that want to adopt such laws. The circuit includes Arkansas, Iowa, Minnesota, Missouri, Nebraska, and the Dakotas.

Still, any city that chooses to adopt such an ordinance would almost certainly face a costly legal fight from advocacy groups that are working to stop them. Earlier this year, the justices declined attempts by two other towns – in Pennsylvania and Texas – to revive similar laws that had been struck down by lower courts. But unlike the Pennsylvania and Texas ordinances, the Fremont rules do not impose penalties on immigrants.

The Fremont ordinance requires renters to get a $5 permit and swear that they have legal permission to live in the United States. First approved in 2010, the ordinance has survived several legal challenges and an attempt to repeal it at the ballot box in February.

The ACLU and Hispanic advocacy groups are, predictably, moaning about discrimination and how mean this law is. But Nebraska gets it right here: the simple fact of the matter is that illegal immigrants broke the law and, quite frankly, have no right to be in this country at all.