Mayor Bill de Blasio told Russian Television International that the NYPD will NOT be complying with ICE or federal immigration laws.

The relationship that New York has with “immigrant communities” is apparently more important than making sure that the letter of the law is upheld.

I’ll have to remember that next time New York wants to pass a silly law like, “My relationship with my Big Gulp is too important to follow your law.” 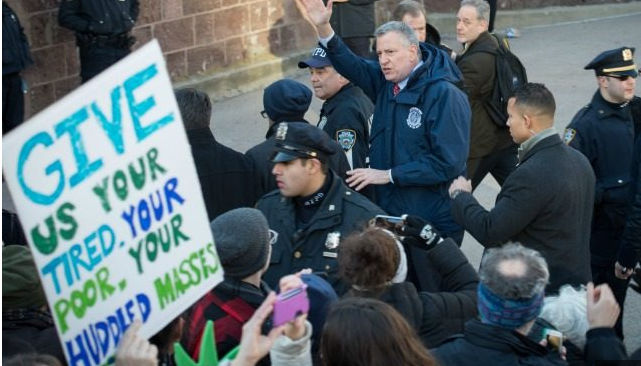 “The NYPD will not participate as immigration enforcement agents because we have, for decades, built a close working relationship with immigrant communities,” de Blasio said. “Our police force is not going to be out there knocking on people’s door and it is not going to share information about people’s documentation status with the federal authorities.”

According to de Blasio, who faces reelection in November, more than half a million people in New York are “undocumented” and a “vast majority don’t commit any crimes whatsoever.”

City officials city and the NYPD officers will cooperate with the feds only in immigration cases which involve “serious and violent crimes,” he said. “In terms of the City of New York, we said the only area where we cooperate is we have a law that delineates 170 serious and violent crimes. If someone is convicted — not just accused, convicted of those crimes — then we will work with ICE in terms of their deportation.”

According to the mayor’s office, ICE has submitted 80 “detainer” requests to the NYPD in 2016. These “detainers” ask local police forces to hold illegals who were arrested for other crimes until they can be transferred to ICE for later repatriation. But only two inmates were transferred to ICE in 2016, and only because federal officials got a warrant or a subpoena from a judge.

This is exactly the kind of legal relativism that is dangerous to the United States and everyone within her borders legally. Being able to pick and choose which laws you want to follow can very quickly backfire on liberals should they choose to continue down this path.